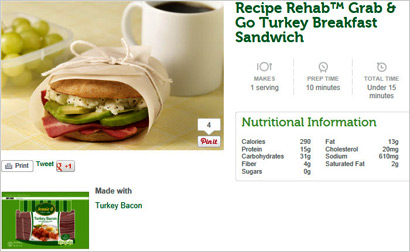 Jennie-O products are being featured in integrations in the popular “Recipe Rehab” show, and in a new cookbook and other “RR” platforms.

Recipes using Jennie-O’s lean ground turkey will be prepared during three of the show’s segments, which began airing earlier this year and will be seen through the fall (each segment is rerun at least once or more), according to Jennie-O’s Director of Marketing Jen Ehresmann. The Jennie-O “Recipe Rehab” recipes -- a “Grab & Go Turkey Breakfast Sandwich,” a “Turkey Enchilada” and “Turkey Lasagna Cupcakes” -- are also being featured on Jennie-O’s site.

In addition, Jennie-O products are featured in five recipes in a just-released cookbook, “Recipe Rehab: 80 Delicious Recipes That Slash the Fat, Not the Flavor” (from HarperCollins’ HarperWave imprint). Paperback and ebook versions of the cookbook are being sold on major book etailers, including Amazon (which is selling the paperback for $16.49 and a Kindle edition for $12.74), BarnesandNoble.com, Books-A-Million, Indie Bound and the iBookstore. The cookbook is being promoted on the Recipe Rehab site.

Jennie-O will also be promoting the book and show on select packaging for six weeks (1.5 million packages each week, for a total of about 9 million packages), and on its “Switch to Turkey” Facebook page (currently with 224,000-plus “likes”) and Twitter account (about 1,000 followers).

Jennie-O also has a partnership with “The Biggest Loser,” including “Biggest-Loser”-approved recipes made with its products.