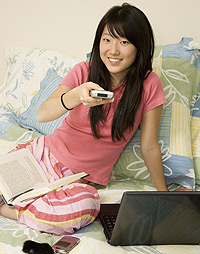 When it comes to buying entertainment for ethnic viewers, there is no-one-size-fits-all concept. Still, one report notes that Asian-Americans are big buyers when it comes to specific movie and TV content.

"Asian American On Laptop And Watching TV" photo from Shutterstock.