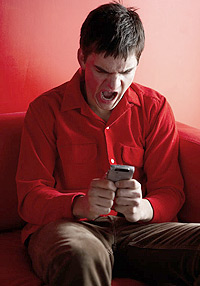 For the first time in years, the telecom industry is seeing improved customer satisfaction scores. But don’t break out the bubbly just yet; those satisfaction rates remain among the lowest of all the industries being measured.

According to the American Customer Satisfaction Index, companies in its “Information” sector (which includes wireless telephone companies, Internet service providers, subscription television service, fixed-line telephones, cellular phones and computer software) is up to 72.3 (on a 100-point scale), though that’s only an increase of 0.6% from last year’s score. (With all industries combined, the ACSI average was 76.6.)

“Things are improving , but these are still industries that are not terribly satisfying to consumers, compared to other industries,” ASCI managing director David VanAmburg tells Marketing Daily. “These are still among the bottom of the industries.”

When it comes to subscription television services, the sector posted a 3% gain for a benchmark score of 68. While this is improvement over the past three years, when satisfaction had been stagnant, the sector is the third worst of the 43 industries covered by the ACSI. On average, fiber optics and satellite companies scored higher than cable companies when it came to customer satisfaction (72 for the former, vs. 63 for cable).

Overall, when it came to subscription television, customers were pleased with the picture quality and resolution, but felt the call-center service lagged other industries, VanAmburg says. “If you look at something like subscription TV they do a good job delivering the product, but they need to work on other things like customer service and reliability,” he says.

In the wireless sector, carriers managed to reverse a 2-year trend of declining satisfaction, to improve nearly 3% for a benchmark score of 72, matching its 10-year high. Like other sectors, however, wireless still lags behind the ACSI average. Wireless carriers also lagged fixed-line phone providers, which had an average index score of 74 (up 5.7%), despite growing evidence that more and more consumers are ditching their fixed lines in favor of pure cell phone service.

“It’s been a pretty dramatic trend in the last two or three years of households that are ditching the landlines altogether,” VanAmsburg says. “Certainly, the big [companies] are aware of that. They’re not really pouring the dollars into that side of the business as much as they used to.”

Among the device manufacturers, Apple led among smartphone makers with a score of 81, which is a 2% drop from the previous year. Samsung, meanwhile, improved to 76 (up 7%) in that same period, showing that the category is becoming more competitive.

“One could certainly pronounce that of the two big phone releases, the iPhone 5 didn’t do anything to boost Apple, while it looks like the Galaxy S3, helped Samsung,” VanAmburg says. “The quality of Apple still reigns supreme, but they really are losing ground, and things are starting to even up because of the notion of the value proposition when it comes to [competitor] products.”

For the first time, the ACSI expanded its telecom coverage to rate the Internet service provider industry, and the results were not good. The sector debuts with an average satisfaction benchmark of 65, the lowest among all of the 43 measured industries. Service reliability, data transfer speeds and video-streaming qualities all contributed to low customer satisfaction scores. High expectations of what top Internet service should be could be a major contributor to the sector’s low scores, VanAmburg says.

“People want faster and more reliable Internet service,” he says. “So many of us work in white-collar settings, and we’re using super-fast [Internet] in office spaces as part of those services. And we’re contrasting that with our own consumer settings. There’s an issue of a contrasting notion of speed that sets an expectation for you.”