New Jersey Proclaims Itself 'Stronger Than The Storm'

Superstorm Sandy is a fading 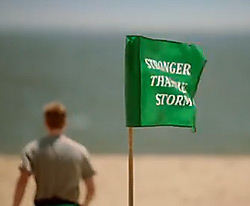 image in New Jersey’s rearview mirror, and the shoreline is open for business.

That’s according to Gov. Chris Christie, who appears in the TV spots of the $25 million tourism campaign along with his wife, first lady Mary Pat Christie.

Both Mary Pat and Chris Christie were featured on "Today" in a broadcast from Seaside Heights Friday. They were promoting the reopening of the Jersey Shore for the summer, seven months after it was hit by Superstorm Sandy.

Themed “Stronger Than the Storm,” the campaign touts the Jersey Shore as a vacation destination.

The six commercials are paid for from a slice of the $60 billion in federal disaster aid earmarked for New Jersey and other Northeast states.

The spots will run in the New York and Philadelphia broadcast markets, where New Jersey viewers will see the spots frequently through July. The commercials also will run in parts of Pennsylvania and other primary markets and will play in Baltimore, Pittsburgh, Washington, upstate New York and Canada as secondary markets. The commercials also will run on a scaled-back schedule in August and September.

Each of the six commercials also has a version without Christie, said Shannon Eis, senior vice president of MWW in East Rutherford, N.J. The company beat out three other competitors in bidding overseen by the state Treasury Department and the Economic Development Authority.

New Jersey has a long history of governors, both Republican and Democrat, starring in taxpayer-financed advertising. In the 1980s, GOP Gov. Thomas H. Kean became nationally known for his trademark slogan, "New Jersey and you, perfect together," in tourism ads.

Christie is on screen for 4 seconds in the first 30-second spot. He and his family have the only three lines of script.

The campaign also includes radio, billboards at the Lincoln Tunnel and in New York's Times Square, a Web site and social media. Christie is absent on many of the supplemental elements, although the Web site has his picture and a link to his "Thank You, New Jersey" video on YouTube.

The Garden State set a new record in 2012, generating nearly $40 billion in total tourism demand. Visitor spending, capital investment and general government support of tourism surpassed the previous record of $39.5 billion reached in 2007, a 2.6% increase over 2011. Domestic visits to New Jersey also continued to rise, with a 4.8% increase to 82.5 million visits in 2012. Domestic trip volume in 2011 jumped 11.6% over 2010.

“While these 2012 results are positive and encouraging, we are still facing the challenges of the aftermath of Superstorm Sandy. We must continue to look to the future and continue the steady progress of rebuilding,” said Christie in a release.

According to The Economic Impact of Tourism Report released earlier this year by the Department of State, New Jersey’s travel and tourism industry directly supports 318,560 jobs, a 2% increase over 2011 and the largest single-year percentage increase over the last six years. When combined with indirect and induced jobs, total travel and tourism-related jobs exceed 500,000, or 10% of all New Jersey jobs.

Tourism generated $34.7 billion of state GDP in 2012, 7% of the entire state economy. Including both direct and indirect impacts, tourism in New Jersey generated $4.5 billion in state and local taxes and $5.1 billion in Federal taxes last year.

Earlier this year, the Christie administration unveiled its proposed Community Development Block Grant Disaster Recovery Action plan, which outlines how the state plans to use more than $1.8 billion in federal funding to rebuild and recover from Superstorm Sandy. The $25 million campaign also encourage New Jerseyans and tourists to shop local, thereby supporting companies that are operational.