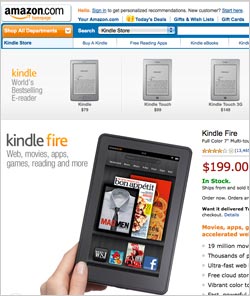 The company’s estimated global ad spending is close to $500 million. In the U.S., the online retailer spent nearly $300 million on ads in 2012, per Kantar.

The scope of work is said to include traditional and digital media chores in all countries that Amazon operates in, with the exception of the U.S., where Initiative will handle traditional media but not digital. Digital media duties in the U.S., handled by MEC, were not part of the review, sources said.

The traditional media incumbent in the U.S. was WPP’s Mindshare, which has had an up-and-down year in the pitch department. Earlier, it lost drug marketer AbbVie, a $300 million-plus ad spending client. On the plus side, it won Lionsgate, with spending of approximately $400 million and Dyson with spending of about $180 million.

For Initiative, the Amazon win is the biggest news the shop has had in some time on the pitch front and a well-needed boost after recently seeing a couple of big clients depart, including Koa USA ($130 million) and Lionsgate.

The agencies either declined to comment or didn’t respond to calls. Amazon didn’t return a query seeking comment.

In addition to the U.S., Amazon operates in the UK, Germany, France, Italy, Spain, China and other countries. The company generated revenues last year of more than $61 billion, up 27%.