Episode 608: "The Crash: She's My Mother/ She's My Sister/ Don Gets His Heart Examined." 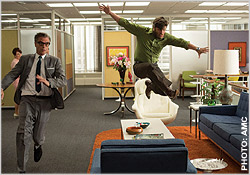 Peggy: “That was very inspiring. Do you have any idea what the idea is?”

Called “The Crash,” this week’s episode reflected a fresh focus for Mad Men: Whores and death and death and whores. (Kidding. About the refreshing part.)

What was new and unexpected, however, was that form followed function: Just like the tweaked out speed trip it was intended to depict, the episode felt all high and low, artificially amped, but also, at times, to use a Sixties term, like a huge “downer.”

Did I like it? Not really. But I admired it.

I give Weiner and the writers points for having the cojones to go with such a deconstructed form. (They showed that they had inside -baseball-balls as well, in that many of the jokes felt self-referential.) 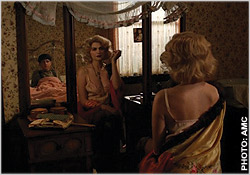 Even though it mined familiar territory (more whore flashbacks!), Don’s story did go deeper, exposing his history more poignantly than ever before. Thus, the episode felt scary, chaotic and abjectly empty at times. For so long, we lost Don to a nether world dream/fever/fugue/speed state; meatime, in the real world, no grown up was in charge.

If there was an overriding theme, it was about what happens to children who do not have adults to take proper care of them, and adults who act like children. Given the kids-are-not–all-right theme, the episode was also about the very upsetting loss of innocence—for little Dick, Sally, and Wendy, the I Ching girl.

It’s never fun to see a molestation/deflowering scene with an underage kid, and even worse to see with the awkward young Dick, (sorry, that’s his name) “seeing what the fuss is all about” right after being spoon-fed chicken soup by kindhearted prostitute Aimee. In her housecoat-like getup, she offered him the only act of maternal nurture he ever got as a child.

To follow that tender act with the sexual one (shall we call it a rape?) was the most painfully literal illustration of a Madonna-whore scene that I’ve ever seen. But it delivered Don’s ROSEBUD moment! 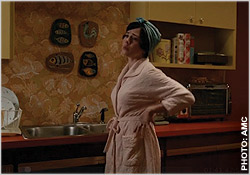 Yes, the mothering/devirginizing was with a woman who had a black beauty mark on her face, and wore a babushka, just like Sylvia! Then he got violently beaten with a wooden spoon, in a kitchen closet(!) by his stepmother, who also resembles Sylvia.  And then he created an ad with a mother who knows what her baby son wants, and she too had a black beauty mark and wore the headwrap!

More Madonna/whore: When Cosgrove did the amazing tap dance, Don asked him where he learned it. He said, “My mother. No, my first girlfriend.”

Don can’t separate mother nurture from sex. Thus, he is destroyed when Sylvia rejects him. It reawakens all the pain he’s never allowed himself to feel while fucking his way through all those mistresses on automatic pilot. I have more respect for the doctor’s wife as an ex than an active mistress. She might be screaming like a fishwife inside her kitchen, but she’s acting like a grown-up with the increasingly unhinged, mooning, leaving–butts-outside-her-door Don.

The episode clearly showed the difference between the other adults and Don, as well. When Ted’s partner died, he took the weekend to be a human being, pay his respects and mourn his loss, work notwithstanding. Had he been at the agency, he would have acted like a parental unit, and come out with some usable work, not gibberish that even misspelled Chevy. 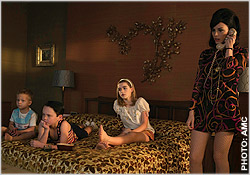 Similarly, Peggy has moved on from Don. She did the proper thing, and attended the funeral,dressed in black, with a pill box hat, like a Kennedy widow.  And then she came in to work. When she finally rebuffed Stan’s overture, she showed that she has grown a lot since the days of Pete. She tells Stan to feel his pain, not avoid it through sex and drugs. That’s the opposite of the advice Don gave her, during the time of her own breakdown and loss, when he said she should “forget this ever happened.”

I am so sad about Sally, who is, to paraphrase the Chevy discussion about kids getting cars from their parents, “the child who is father to the man.” Her mother is a self-involved baby.

Betty complains about Megan treating her like the “hired hand,” but offers more insults than actual care to the girl. Blonde, but still slightly plump, Mother Betty is the one who treats her daughter like the hired help.

That’s why it was so upsetting to see her left in charge of the apartment and her brothers at such a tender age for this lost weekend. It clearly underscores that Don, in his hugely damaged way, is merely repeating the same neglectful pattern with his own kids, and that’s a horror.  He is abjectly negligent this season. (As an aside, he had no thought about the safety of his own family when he left the back door of his apartment open, in the hopes that Mrs. Rosen might sneak in.) 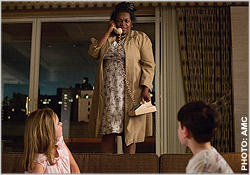 As for “Grandma Ida,”  I didn’t think Weiner  would have the chutzpah to combine that many stereotypes in one to make the thief a black mammy type. (Realistically, a well-dressed white person has a much better chance of wandering around a Park Ave. doorman building  unnoticed.)

So when she showed up, I wasn’t sure whether Sally was dreaming or not, since in a previous episode last season, Don had a fever dream in which an ex-girlfriend came in the kitchen door, and he ended up having sex with her, then killing her.

Let’s face it, the greatest line of the night was Bobby asking, “Are we Negroes? But Ida put her finger on what was wrong with almost everyone in the cast this week when she told the police “those children ought to be in bed and they ain’t too well behaved.” If anything, Sally acts too well behaved, too brave and nice and trusting.

The scene was really scary, especially when Ida took the phone away. She could have tied them up and killed them. (And it’s pretty funny that Bobby is the young Weiner, interested only in whether he can watch TV.)

Too bad that Betty had to take even that traumatic moment for the kids and turn it into a victory lap for herself, putting down Megan’s casting couch, etc. Henry running for public office is her concern, not the nightmarish trauma that Sally has gone through.

Another thing that got me furious: Both Megan and Sally apologize to Don that it happened! The only reason it happened was because he was the inexcusably negligent parent. 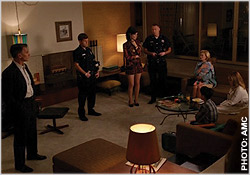 hey all think he cares about his kids enough to faint at the news of the robbery, but it has not one iota to do with his kids. It has everything to do with coming down from his speed jag of obsessing over Sylvia and how to “get his foot in the door” with her. Over the course of the weekend, breaking through to Sylvia gets conflated with breaking through, “getting in the room” with the Chevy  client.

In the end, he is rejected by both of them. So Don does the only thing he knows how to do: starch his collar, button up his shirt, Brylcream the hair, and put on the armor -- and reject them back. Before that, of course, we got his ultimate line about whoredom: “Every time we get a car, this place turns into a whore house.”

But in MM, the whole advertising industry is a metaphor for whoredom. And that makes it even more ridiculous that so many actual advertisers  (a car and an airline) use Hamm’s most stentorian voice in their own commercials. What a lack of creativity! Weiner might have been getting at that with Don’s line bout the “timber of my voice being as important as the content.”

Don’s reaction is not exactly a recipe for success.  So that’s why I’ve got Sonny and Cher in my ear right now. I’m hearing, “You better sit down, kids.” But how genius was it that an episode that was all about kids ends with a song from the Mamas and the Papas?