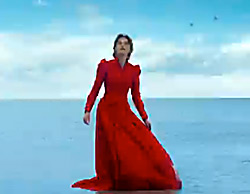 We’ve been through the HDTV era and the 3DTV era -- now get ready for the Ultra-HD TV (UHD) era. As Sony becomes the first to market with its 4K Ultra HD TVs this week, the company has launched a new marketing campaign designed to introduce the public to the latest in TV technology.

In a new television commercial, director Garth Davis (who directed the recent miniseries “Top of the Lake”) and Academy Award-winning cinematographer Claudio Miranda show off the wonders and colors of the new 4K technology. In a voiceover, Davis mentions how “colors become clearer, details become richer” as dreamlike images (a bluebird leaving Davis’ hand to step on a piano, a woman in a bright red dress walking on water, a group of people climbing a ladder in the middle of nowhere to wave a torch at sunset) appear on the screen. “Now there are no more barriers between the world that I see, and the ones I show you,” Davis concludes.

In addition to the television commercial, Sony will run digital, print and radio ads, mobile and social channels and through experiential events. All of the elements are intended to drive consumers into stores where they can see the advances realized by the new technology firsthand.

“In this case, seeing is certainly believing,” the representative says. “Sony has done its best to articulate both verbally and visually what the differences are, but ultimately, we want to encourage consumers to drop into a retail store and see the Sony 4K difference. We are confident that they won’t regret the trip.”

The 4K campaign is the first element of a year-long effort by Sony to show how emerging and established artists, filmmakers, musicians, photographers and others are inspired by the company’s technology. The campaign was developed by Sony’s advertising agency, 180 Los Angeles.