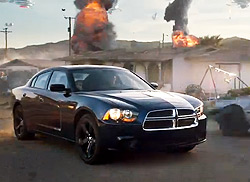 Chrysler LLC's Dodge, which has category-exclusive sponsorship of the "Defiance" TV show and online game for PC, PlayStation 3, and Xbox 360, is extending the Syfy and Trion Worlds bi-focal partnership with a new television commercial and social gaming sweepstakes.

The partnership includes a raft of co-branded advertising and promotions. The new TV spot shows the Charger surviving the horrors of a post-alien world in 2046. The car starts as a current-era model. As it moves through the ruined landscape, however, it becomes the fortified model from the show and game.

The other big addition to the partnership is a social media-centric sweepstakes game via Ignite, with help from the Defiance people who worked on developing the alien’s language. The “Dodge Defiance Arkfall Sweepstakes” uses Facebook’s Open Graph API technology that integrates stories into Facebook, and share news feeds to friends on Facebook across different platforms and create "factions" or teams.

The five-week game (not to be confused with the actual Trion "Defiance" game itself) uses a plot device from the series: Arkfalls are fragments of the aliens' ship that plummet to the Earth. In addition to destroying whatever they hit, they contain technological wizardry.

Each week a new Arkfall occurs in the game. Participants must locate the Arkfall to launch the social game of the week. Once a participant has completed the game, their faction (team) will receive a point into the weekly sweepstakes and the entrant will also receive one entry into the grand prize drawing. The game lets players create an Ark Hunter avatar, build a team, and search for the Arkfall technology.

The grand prize is a trip for two to Comic Con in San Francisco. There are also weekly prizes: gaming systems, the “Defiance” video game itself and Dodge brand merchandise, per the Auburn Hills, Mich. automaker.