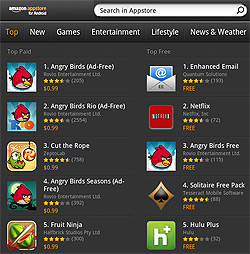 Amazon may have been late to the app store game, but that hasn’t stopped it from going global. The online retail giant on Thursday said the Amazon Appstore is now available in nearly 200 countries worldwide.

It launched its Android-based app storefront earlier this month in China and also tipped plans to expand into Australia, Brazil, Canada, Mexico, India, South Africa and South Korea. Brazil is next up in the coming months.

To help promote the global push, Amazon is offering two of its most popular titles, “Fruit Ninja,” and “Cut the Rope: Experiments” for free on Thursday and Friday through its Free App of the Day feature. For a limited time, it’s also running special offers and discounts in connection with other top games from brands, including Ubisoft, Sega and Rovio Entertainment.

Opened in the U.S. in March 2011, the Amazon Appstore has only about 75,000 apps, compared to roughly 750,000 apiece in Apple’s App Store and Google Play. Barnes & Noble this month also added Google Play to its Nook HD tablets to better compete with Amazon’s tablets and Android app store.

Despite its smaller scope, a study by app advertising and analytics firm Flurry earlier this year suggested Amazon is doing a better job of driving revenue for app developers than Google Play. The findings indicated that for every $1 an app generates in the App Store, it drives 89 cents in the Amazon Appstore, and 23 cents in Google Play, through in-app purchases.

The announcement coincided with Amazon’s global rollout of the HD Kindle Fire. The company will offer the seven-inch and 8.9-inch versions of the device in more than 170 countries, starting June 13. Previously, the Kindle Fire HD was only available in markets such as the U.S., U.K., Germany, France, Italy, Spain and Japan.