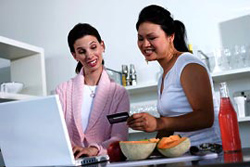 Video, mobile, social, and better search capabilities continue to make it easy for consumers to buy online -- not just kids, but also older adults. In fact, 65% of girls ages 6 to 16 are more likely to buy straight from a mobile ad if there is a means to do so.

Some 80% said they would buy immediately, while 20% would rather wait for a special occasion. Given the purchasing constraints of this demographic, mobile ad agency MobiGirl Media, which conducted the study, said 27% would buy with a credit card, but 48% would ask their parents to purchase an item for them.

MobiGirl Media, a COPPA-compliant agency, conducted an in-app survey of 775 girls ages 6 to 16 to determine their buying habits and purchasing power on mobile advertising. The study also looks at the type of ads they love most, and how the tweens and the young teens spread the word when they love something they see in a mobile ad.

Some 22% of girls surveyed said they tap on the ad in mobile app just to view it, while 56% tap on an ad when it's for a product that interests them. Some 53% of tweens would share a cool product with their friends. Of those, 58% said they would share products they love with friends in person, and 42% would share things by sending a text or with an in-ad share button.

Impulse buys give these consumers easy access to products. While 58% of tweens said they are more than likely to tap on ads containing deals and free stuff, marketers should consider abandoning campaigns using follow-up promotional offers for this market segment.

Conversely, close to half of baby boomers and seniors plan to spend more time on mobile devices during the next year -- and about seven in 10 own a mobile phone, according to Google. About 78% of boomers and 52% of seniors are online, spending about 19 hours weekly on the Internet, which remains the top information source for research and news.

Overall, across all adult demographics, consumers are spending more on digital music. The U.S. population spent $1.34 billion on digital tracks in 2012, up from $1.27 billion in the prior year, according to Nielsen's U.S. Entertainment Consumer Report. Digital music buyers are 45% more likely to be 25 to 34, while those who purchase physical CDs are between 35 and 44.

Those spending come from households earning an average annual income of $66,000, and contribute to more than 70% of spending on entertainment, such as books, video-on-demand and music. Internet users who purchase digital music are more likely Asian, 8%, or Hispanic, 5%, compared with the average adult online.