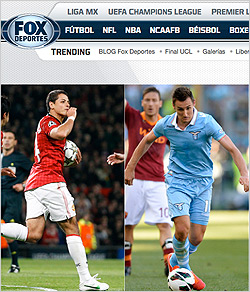 Fox Deportes Studios will produce content around big sporting events, fan experiences at stadiums and arenas and the human interest stories embedded in spectator sports. The broadcaster is also expanding its coverage of NASCAR, UFC and Golden Boy Boxing.

The new programming reflects growing interest in these sports on the part of Hispanic males, who have branched out from traditional favorites like soccer and baseball in recent years.

Fox Deportes also revaled plans to re-launch its Web site, FOXDeportes.com, with an eye to offering more coverage of U.S. and international events and new original content, including exclusive photo and video galleries.

Earlier this month, Telemundo Media launched Fluency, a multiplatform video production studio based in Los Angeles, to produce content in both Spanish and English, in categories ranging from romantic comedy to science fiction and adventure. Programming will be distributed by Telemundo owner NBCUniversal across platforms including broadcast TV, subscription video-on-demand, and mobile.

Back in 2009, Univision upped its investment in original content with the launch of a new production company, Univision Studios, based in Miami. The studio produces programming include original telenovelas, as well as reality shows, dramas and entertainment specials.