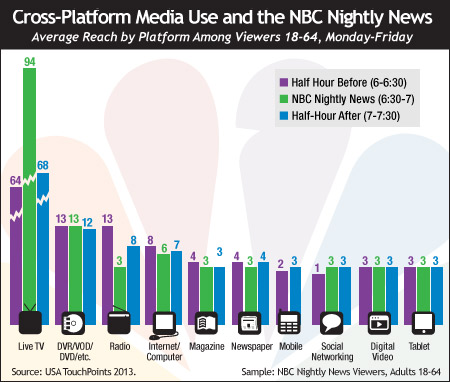 Consumers have long since exposed themselves to more than one medium at a time.  Whether reading a newspaper while listening to the morning radio over breakfast or reading a magazine while watching TV, the behavior is not new per se — only now we have more options available to us wherever we are and some are more multifunctional than in the past.

The flurry of activity in the last year that has resulted in alliances between digital and so-called traditional media to extend viewer engagement and increase advertising and measurement options to facilitate better use of that engagement. The result: social media and TV in particular are becoming more comfortable bedfellows, albeit still slightly warily.

For this USA TouchPoints analysis, we looked at the NBC Nightly News to gain a better picture of how the cross-platform profile of program viewers shapes up before, during and after the program in the average week.  This enables a view of the relative performance of all media among program viewers — recognizing that the results may be different for subsets of the audience and different days of the week.

The program serves as an example (though not a mirror) for other nightly news programs and for the kind of analysis that can be undertaken for other major programs.

*Although this is a cross-platform story, in terms of average reach across the week, this is very much about TV. While the sheer size and dominance of the medium and the fact the analysis is centered around viewers of a particular program makes this inevitable, the extent to which TV – especially when combining Live and other viewing in the form of DVR, VOD etc. – so completely outperforms other media in terms of reach is perhaps more surprising.

*With only Radio exceeding 10% reach at any point (with 13% in the half-hour before the program - no doubt resulting from the number of people in their cars coming home from work or other errands) and the Internet via Computer delivering between 6-8%, all other media fall below 5% average reach across the week.

*Interestingly, this consistency in reach is the same for printed media like magazines and newspapers as it is for media, such as tablets, social networking or mobile phones.

*There may be a number of factors behind these figures. They could be driven by the time of day (people having returned home and needing time to switch off from work and relax) or it could be content-driven.  Perhaps those who watch the news at this time are doing so to relax while catching up on the days events. They do not wish at that time to engage with other media. Also, after arriving home, family interaction will demand attention that might otherwise be devoted to media. Finally, there is always the simple consideration that watching TV while eating makes further media use almost impossible and for many, the nightly news overlaps with meal time.

*Other news programs run at different times may achieve different levels of cross-platform media use, as will different types of programs.  But it is clear from this analysis that while other media are in play during the NBC Nightly News, it’s the program itself that is the main event.