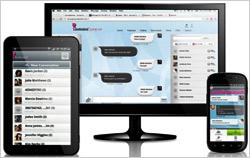 The future of cookie tracking lives on the silicon chip, not in the Web browser. It makes interactive television the data source.

The company's software ties television content with advertising on smartphones and tablets. Flingo software embedded on a semiconductor chip gets built in to televisions, Blu-Ray players and set-top boxes.

"The ads on your phone, tablet and or PC Web page synchronize with the content on your television," Navin said. "Typically, you would see ads associated with products you're searching for on Amazon or Google, but Flingo turns the TV into the data source."

As many companies struggle with smart TV, Flingo's core technology analyzes the video on the television to determine the show or the ad on screen, syncing it with content on smartphones and tablets. Navin has been working with semiconductor makers for years. Companies like Intel, Broadcom, MStar or Entropic embed Flingo's software on the chip to automate processes, collect data, serve up content and track the movement of users through the Web.

Long-term it could mean the end to browser tracking cookies and instead relying on System on Chip (SoC) technology embedded in electronic devices to identify purchase paths from device to device.

Google, Microsoft and Yahoo, among others, rely on the one-log in method. Embedding ad-tracking software on the chip in smartphones, tablets and PCs could eliminate the need for browser cookies if the automation moved to the semiconductor chip.

Navin believes Google will offer something similar, but not embed software in the semiconductor chip. "They will own the ad technology in the Android layer for Google TV; it won't necessarily go into the chipset layer," he said. "They will treat the chips as a commodity."

The company also introduced Samba, which enables advertisers to build direct relationships with TV viewers by synchronizing media on TV, as well as tablets and smartphones. The technology identifies TV shows within seconds, and makes related content available to consumers. It leverages check-ins, polls and quizzes in apps on smartphones and tablets to interact with TV content.

Navin said a small piece of Samba that processes image and video integrates on the semiconductor chip. The user interface is typically implemented by a Web browser running on the Internet-connected TV or on a nearby smarphone, tablet or PC. It's done through proprietary automatic content recognition technology.

There are many possibilities. Through a partnership with Innovid, Flingo can monetize that connection from TVs to other devices, giving advertisers targeted, interactive and actionable ad experiences.

Flingo, founded in 2008, has raised about $8 million from August Capital, Mark Cuban, Gary Lauder and others.