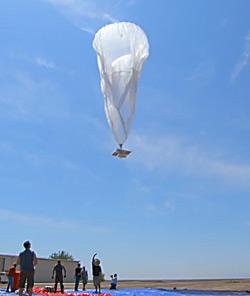 Google scientists believe hot air balloons can lead to a truly connected worldwide Web. The latest project from X lab, which brought us projects like Google Glass, uses balloons to connect people to the Internet without access. The company said the balloons are not visible without a telescope in the sky. They would fly in the stratosphere, higher than commercial airplanes.

Google has launched 30 balloons 12 miles into the stratosphere to test the system in New Zealand's South Island with 50 testers. The wind and the sunlight build the network in the sky. "If the balloon circles around the bottom half of the world, eventually the balloon over South Africa will pass over South America," according to Mike Cassidy, Google Project Loon project lead, who believes balloons can solve terrestrial-to-Internet connectivity, such as jungles, archipelagos, mountains.

Challenges are many. I had the opportunity to go up in a manned (Sunrise) balloon earlier this month and know the difficulty in piloting the aircraft. Trying to direct a fleet of unmanned balloons seems more daunting. Some of the challenges point to radio frequencies and the whether or not all will read and interpret the signal the same. Google mentions testing freestanding methods to allow them to "sail freely on the wind." Scientist had to figure out how to "control their path through the sky."

I'm a big believer in moonshot thinking. Being afraid to take a risk to solve a challenge stifles innovation and possibilities for future generations.