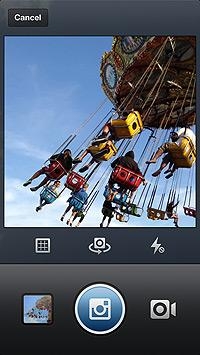 Taking another page from Twitter, Facebook on Thursday unveiled a short-form video service that will compete directly with its rival’s explosively growing Vine app.

The new feature, integrated into the social network’s Instagam photo-sharing app for iOS and Android, will allow users to create videos up to 15 seconds long -- more than twice as long as Vine’s 6-second limit. Video on Instagram also offers 13 new filters for clips, editing, and image stabilization to smooth out shaky videos.

Facebook is already touting a number of high-profile brands that are using video on Instagram for marketing purposes, including Nike, Michael Kors, Burberry, General Electric and the San Francisco Giants. While Instagram hasn’t yet introduced advertising in its service -- backing off after its terms-of-service debacle -- the new video feature has raised speculation about whether ads will be integrated at some point.

“What we did to photos, we just did to video,” said Instagram co-founder and CEO Kevin Systrom, in announcing the new service. He noted that the popular photo-sharing app has grown from more than 130 million monthly active users -- that’s up from about 22 million since being acquired early last year by Facebook for $1 billion.

Facebook itself is expected to add video advertisements that play automatically in the news feed, but has reportedly delayed that initiative until the fall.

“We believe that in 2014 Facebook will make a big play in video advertising and while they are already sitting on a tremendous amount of video, adding video in Instagram would surely increase that inventory significantly,” said Rob Jewell, CEO of Spruce Media, a Facebook Strategic Preferred Marketing Developer.

With the new product launch, Instagram jumps into the hot market for app videos led by Vine. The 6-second videos created with the app and shared instantly on Twitter have become a mobile sensation, fueled by teen and young adult users.

With its skyrocketing growth and youth-skewing audience, brands have also rapidly embraced Vine. Marketers from General Electric to Urban Outfitters to Armani have used the Vine to create their own concise marketing videos, with an emphasis on quirky and creative approaches.

Only four months after launching on Twitter, Vine has amassed 13 million users who share millions of videos each day. It now ranks as the No. 3 free app in Apple’s App Store, well ahead of Instagram at No. 22, and Instagram competitor Snapchat at No. 9.

About 63.7 million people in the U.S. overall regularly watched video on their phones last year, according to eMarketer, with that figure is expected to grow a further 16.9% to 74.4 million in 2013 as smartphone adoption expands.

Starting with 130 million users worldwide obviously gives Instagram a built-in advantage in mobile video. But it’s clearly aiming to set itself apart from Vine with different features, most notably in the longer length of videos.

Instagram also extended its signature feature for adding custom filters to photos to videos, with a series of new filtering options built specifically for the video. A new technology called Cinema helps eliminate the shakiness when someone is walking or running while filming with a phone camera.

Jeremy Lockhorn, who leads the emerging media practice at Razorfish, suggested that Instagram’s take on mobile video should appeal to marketers. “The extra time (versus Vine) could be better for storytelling, without being too long, and the filters and stabilization capability may help create a more polished look and feel,” he said.

Facebook said high-profile brands including Nike, Michael Kors, Burberry, General Electric and the San Francisco Giants have already created videos with the new service as part of their marketing efforts on Instagram.

The debut of video on Instagram comes just a week after Facebook introduced support for hashtags, a convention popularized by Twitter for aggregating conversations around particular topics. “Adding Vine-like functionality to Instagram would be just the latest example of Facebook grabbing a feature from a small social competitor and offering it to hundreds of millions of its own users,” noted Forrester analyst Nate Elliott.

The step doesn’t necessarily mean Vine will wither. The launch of Facebook’s Poke app this year to compete with Snapchat has proven a dud. And prior services rolled out like Facebook Deals and Facebook Places haven’t spelled doom for startups like Groupon or Foursquare, as AllThingD’s Mike Isaac recently pointed out.

Even so, Twitter isn’t standing still. In advance of the expected Facebook video announcement today, the company on Wednesday hinted at new Vine features in a series of tweeted clips from Vine co-founder Dom Hofman. Among other things, they suggest the addition of a text-messaging feature.