CANNES, June 21 – Note, please, the dateline. The Cannes Lions Festival of Glorious Excess is an annual rite of solstice. So how amusing to be sitting here on this particular Friday with Sir Martin Sorrell, CEO of WPP and the man himself nicknamed “June 21st" -- because he is the shortest knight.

Pretty great joke, but it's mean and gratuitous, and I can no longer glibly tar Sorrell with such a shallow and disparaging diminutive.

First of all, to see the man in action is to understand why he is a towering figure in the industry. Speaking to a Berlin School's Cannes Creative Leaders Program, he delivered a virtuosic performance of depth and scope. Sorrell speaks extemporaneously and with absolute command about the Mideast, Tayyip Erdogan, Brazilian infrastructure, Edward Snowden and the NSA, the trading dynasties of Saudi Arabia and the brand-by-brand market rankings of various prosaic categories in disparate countries of the world (not to mention every minute aspect of WPP's financials, portfolio and personnel.) All the while he is quantifying his remarks with percentages that he feels no need to qualify with “about,” because he knows them precisely.

Positively Clintonian is His Sir-ness. 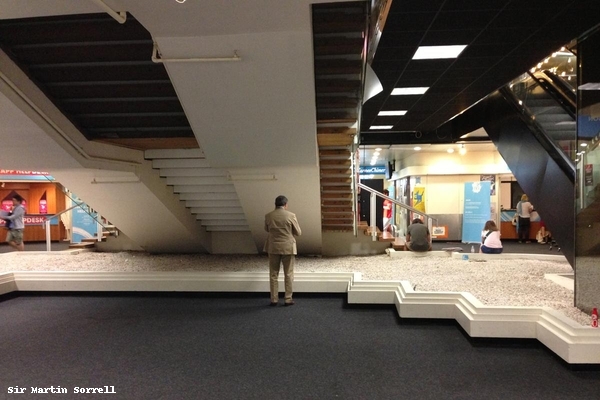 But as to what digital will look like, he offers…well, what’s the British word for “shrug?”

“We are wrestling with the technology.”

Sorrell speaks with some combination of pity and distaste for WPPers “sitting in some creative department slaving away on ads that people aren't paying for and harboring doubts about their value.” He quotes a magazine article hypothesizing that “tv might be in the same position as newspapers were in a few years ago.”

Says the man who controls $70 billion in media spend: “There are changes going on.”

"Slowly, the new media will cease to be thought of as new media; they will simply be additional channels of communication. And like all media that were once new media but are now just media, they'll earn a well-deserved place in the media repertoire… but will almost certainly displace none."

Here I am obliged to remind him that certain parties (ahem) were predicting exactly such displacement in rather exquisite detail -- including but not limited to the gradual collapse of newspapers, magazines and television -- while he was busy comparing the Internet to cable or whatever. He wasn't with that analysis seeming the shortest knight; he was seeming the Pythonian Black Knight claiming no harm had been done to him.

Having thrown his words back at him, I watched a wry smile cross his face.

“You're trying to seize on facts to justify your hypothesis,” he said.

It got worse. Moments later he was accusing me of having no sense of irony, which is rather like telling a carpenter he cannot saw. But never mind. Sorrell was right. While he was busy building a phenomenal global business, I have been frantically riding a single hobby horse, like Paul Revere in a nursery, warning about invading zeroes and ones. But lo and behold, in 2013, with the likes of Aereo, Boxee and Netflix in fact disintermediating the TV industry and publishing circling the drain -- and with digital publishing tragically unprofitable -- the facts do justify my hypothesis.

After all, only $3.5 billion of WPP's $15.6 billion revenues in 2012 were from -- strictly defined -- the advertising business. At a certain point, Sir Martin talks about the prospect for technology yielding higher CPMs and I interrupt. “Excuse me…hasn't that already been litigated, due to the law of supply and demand?”

Well, Sir, thank you for that. It is not nothing for the likes him to concede a large point to the likes of me. Short, we should always remember, is not the same as small. And we should also remember this: the man who was introduced today as “the leader of a $1 trillion industry” has -- grudgingly or not, at least by implication -- conceded the astronomical fact of longer nights ahead.

cannes, digital, future of media
1 comment about "Sir Martin The Big".
Check to receive email when comments are posted.
Next story loading