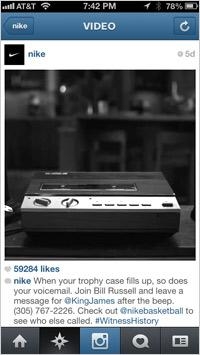 Opinions about Facebook’s answer to Twitter’s Vine via Instagram video appear to be all over the map. Instagram purists are outraged by the new feature creep that they see invading the point, shoot and edit app. As if one more button will kill them and they can’t just ignore the video option altogether. Others complain that the video capture mechanism is sluggish. I didn’t find it so.

Still others seem to think that Facebook/Instagram has the throw weight to overwhelm the stand-alone Vine app with this more integrated solution. According to one count, more than 5 million videos were uploaded to the Instagram platform in the first 24 hours of the update. Well, we’ll see how long it takes Twitter to think integration as well. I would counter-argue that Twitter is more of a go-to app when people are making quick posts. On the other hand, some feel it is inspired to extend the video length from Vine’s 6 seconds to Instagram’s 15-second clips, which seems to invite more involved storytelling that brand marketers might embrace.

Who knows for sure what format and app users will prefer in the end?

I am a little more interested in what the platform inspires people to do. If there is one lesson from Vine, it is that the constraints of the format spark creativity. Some of the stop-motion clips posted by brands to Vine have been truly energizing. The compression of the format seems to map so well against the device itself and the quick media consumption it invites.

Taking a quick tour of the top brands on Instagram (as tracked by Nitrogram 50), I am bored by the few initial stabs at this, event though everyone has had a number of months to play with Vine. Starbucks gives us a rapid-cut view of what I believe is their flagship store. A couple of others like Forever21 and Victoria’s Secret mimic the Vine montage or stop-motion techniques. Unfortunately, the 15-second length makes the motages without story arcs tedious. In the Instagram feed the videos do autostart just like Vine’s, but they don’t loop and lose that all-important munchability of Vine. There is a world of difference between scrolling through 6-second clips and 15-second clips.

Granted, some brands tried. Red Bull toasted the new Instagram feature with a video of staffers depicted via the new interface toasting with Red Bulls. Michael Kors posted an “#InstaKors” day-in-the-life montage. Victoria’s Secret did a stop-mo of briefs and tops match-ups. Playboy did clips of photo shoots.

None of this is bad per se, but it does remind us perhaps why Viddy, SocialCam and other first-gen mobile video apps seemed to peak early. They give too many marketers too much leash on which to be just barely interesting. Vine’s format forced everyone to rethink video. And more important, the format was so easily consumed and reviewed without much investment.

Our worst fears about this format are realized at the feed from the most popular brand on Instagram. Nike repurposes a snippet from their new LeBron voicemail ad in which he gets congrats from Bill Russell. Perhaps the worst that can be said of the Instagram video feature is that it invites brands to be lazy and repurpose other media. That this format matches the format of the classic 15-second TV spot seems more than coincidental and a bit depressing.

Granted, it is too soon to tell -- but my snap judgment based on the first few days of branded content on Instagram video suggest that marketers are going to have to work against the worst temptations of this format in order to make it interesting.