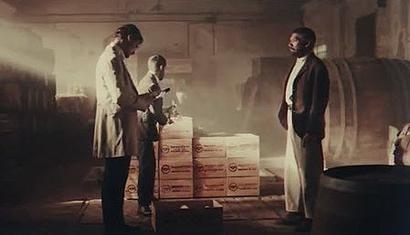 Bacardi, which launched its integrated "Vivimos! ("We live!") marketing campaign late last month, is now rolling out stage two -- including airing one of its videos in about 100,000 U.S. movie theaters over the summer, with a mobile interactive element via Shazam.

The campaign aims to build brand awareness and loyalty among Millennials -- males ages 21 to 24 in particular -- by conveying the 151-year-old brand's authenticity and spirit through its history.

The video to be shown in theaters starting next week ("The People Take Arms") through a partnership with Screenvision, highlights the roles played by Emilio, eldest son of the rum brand's founder, Don Facundo Bacardi Massó, in Cuba's fight for independence from Spain. It also made its television debut on "Jimmy Kimmel Live!" on June 25, and will air nationally during late-night programming throughout the summer.

As the video airs during coming attractions in theaters, moviegoers who have downloaded Shazam's app on their smartphones will be able to access additional content on YouTube-hosted Vivimos.com and Bacardi.com -- including behind-the-scenes footage, recipes and more films telling the Bacardi story -- by pointing their phones at the Shazam icon that will appear on the bottom of the screen.

Given the high production value of this film and two others created for the campaign, all directed by Jake Scott, in-theater exposure is "a great way to bring Bacardi's history and story to life," says Toby Whitmoyer, VP and brand managing director for the rum category at Bacardi USA. The Shazam element heightens engagement for Millennials, who routinely interact with multiple screens, he notes.

Another short film, "Dawn of a Free Cuba," tells the story of how the Cuba Libre was born: American soldiers fighting in Cuba after the United States joined in Cuba's war for independence mixed Bacardi with their Coca-Cola. That spot kicked off the Vivimos! campaign, debuting on national network and cable television programming on May 20, Cuban Independence Day.

Early this week, these two videos were posted on Vivimos.com, joining a six-minute film ("Eve of the Revolution") featured there since the campaign's launch, as well as the behind-the-scenes footage, archival photographs, and short stories highlighting historical events that shaped the brand (which continues to be owned and operated by the founder's descendants).

The campaign, from the OW agency, also employs the historical images and stories in the brand's social media assets and in print ads appearing in magazines including Rolling Stone, GQ and ESPN The Magazine.

In addition, out-of-home advertising is being employed to promote the Cuba Libre beverage.