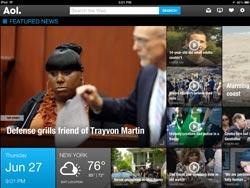 I was hoping that someone at AOL had enough of a historical sense to play about with the launch of the company's new portal-style tablet app and have it open with an old-timey modem sound and the once familiar, tinny “Welcome.” For a generation of early adopters this was the way into digital and the “World Wide Web” back in the day. For all the bashing AOL took from experienced users for its garish graphics and hand-holding ethos, let alone polluting the world with free CD disks, it served an important function historically by making the Internet safe and friendly for newbies -- which was pretty much everyone.

There is some of that sense in the new tablet app that presents a portal's eye view of the world in a modernized home page style. The app is designed to make AOL's many vertical offerings, HuffPo news and video, its mail service, etc. all accessible and straightforward. “Welcome.”

In my mind, AOL has been working in mobile more thoughtfully than perennial rival/rumored merger prospect Yahoo. I have watched the company explore smart WAP/mobile Web designs years ago, experiments in app design in the Edition answer to Flipboard, bad and then better iteration of HuffPo for devices, and good tablet editions of top blogs like Engadget. The company has been thinking about device-based access to content for a while and it shows here.

The AOL app is a visually oriented wonderwall of tiles that let the user customize the main feed. You can tap to include or exclude certain categories in the feed, and the app is supposed to learn your tastes over time. You can favorite content for later review and share through AOL Mail. Alas, that is the one major misstep I see in this app -- its refusal to let users email content via their default tablet account. Well, the buttons are too small in many places too. And the interface could use some pop-up synopses to maximize the surface detail of the visual interface. Okay -- so that is more than one failing.

But AOL always had stuff that bugged you.

What the app does very well for the company is gather and impress with the vast content holdings it has assembled over the years, from TechCrunch and deep video content to HuffPo and its very interesting day of live programming. This app gives the more general and less wonky reader who does not go to HuffPo exposure to AOL's trove. I especially like the use of clips from the HuffPo Live video programming. I have no idea whether many people really watch this ambitious cable-like slate of live streaming content. But AOL is smart to use the service as a rich source of video clips that can be redistributed in story wrappers that come into apps like this one.

The app reminds us that while this former bulwark of the Internet is not the force it once was, the lights are on and someone is at home…thinking.