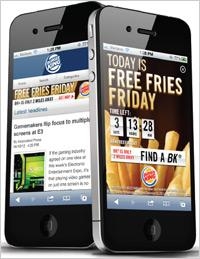 Retailers are scampering to catch up with smartphones-wielding shoppers, investing larger amounts into both email and paid search. A new study from Forrester and Shop.org, the online arm of the National Retail Federation, finds that 87% of the retailers it included in its research either already have or are planning to implement mobile email optimization this year, with 71% planning to optimize paid search for both tablets and smartphones.

The analysis, “The State Of Retailing Online 2013: Marketing & Merchandising,” finds that, on average, 28% of emails sent are first opened on a shopper’s smartphone.  That’s even truer for smaller retailers, who report that 42% of marketing emails are viewed first by phone.

And while 80% of respondents say they will increasing spending on email and search this year, they’re generally skeptical about the hype from other mobile innovations, including coupons, location-based techniques and QR codes. For example, 62% of those in the survey say they don’t offer mobile coupons; 67% say they have no intention of pursuing check-in programs, while 57% won’t use geo-fencing.

They are spending, though, on Google Product Listing Ads (PLAs), formerly offered to them for free. The PLAs are getting about 6% of their digital budgets, “often from the funds previously allocated to comparison-shopping engines.”

The largest retailers in the study had an average digital marketing budget of $13.9 million, with the largest chunk—an average of 36%--going to paid search. (And 68% say those search buys, despite being more expensive, were more effective for them last year.) Overall, 80% of the respondents say they are increasing spending on paid search and email this year.

And while social still represents a minor investment, it’s growing. More than half of the respondents (which included marketing execs from 65 retailers) are upping their Facebook spending; one in three is increasing its Pinterest presence, and some 25% are spending more on Twitter, YouTube, and Instagram. “With several years of social media experience under their belts, retailers have come to understand that these vehicles may not necessarily drive direct sales revenue but can be very productive in telling, developing, and spreading their brand stories to capture customers and grow sales, whether in-store or online,” writes Sucharita Mulpuru, Forrester research VP and principal analyst.

Asked about their main digital goals, retailers say that personalization and channel integration continue are tops on their digital shopping lists. Some 72% are investing in better video integration methods, and 62% are focusing more on making recommendations and personalization (including creating different home pages.)

“Retailers continue to optimize the customer experience on their site and to that end have made investments in A/B testing, product detail page enhancements, and personalization mainstream,” she writes.  “Going forward, however, we expect to see much more emphasis on checkout enhancements, as that is a key obstacle for direct transactions on mobile devices.”