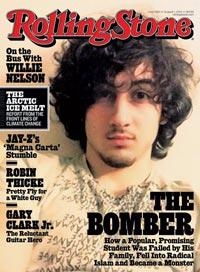 CVS and Walgreens are among the retailers refusing to carry the August 1, 2013 issue of Rolling Stone because of its controversial cover, which carries a picture of Dzhokhar Tsarnaev, the suspect in the Boston Marathon bombing on April 15 of this year.

The cover has sparked fierce criticism because it appears to glorify Tsarnaev by affording him the same sympathetic visual treatment a popular musician or movie star might receive: the photo, taken before the bombing, shows Tsarnaev with tousled hair and a printed T-shirt in artistic lighting.

The text blurb for the article by Janet Reitman is less sympathetic, reading: “The Bomber. How a Popular, Promising Student Was Failed by His Family, Fell Into Radical Islam, and Became a Monster.”

CVS released a statement reading, in part: “As a company with deep roots in New England and a strong presence in Boston, we believe this is the right decision out of respect for the victims of the attack and their loved ones.” Other retailers that are refusing to carry the Tsarnaev issue include Tedeschi Foods and Roche Bros., both of which are based in Massachusetts.

Rolling Stone has responded with a statement explaining the rationale behind the article, if not the choice of image: “The cover story we are publishing this week falls within the traditions of journalism and Rolling Stone’s long-standing commitment to serious and thoughtful coverage of the most important political and cultural issues of our day. The fact that Dzhokhar Tsarnaev is young, and in the same age group as many of our readers, makes it all the more important for us to examine the complexities of this issue and gain a more complete understanding of how a tragedy like this happens.”