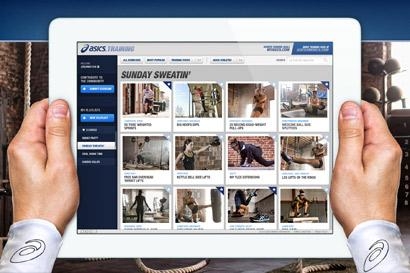 Both ASICS and Brooks, brands known best for their running prowess, are introducing new digital initiatives aimed at expanding their core base.

ASICS, which launched its new training line this spring, is hoping to further cash in on the surging popularity of cross-training with a digital training tool, which allows users to build and share videos to make exercise playlists. Users can create playlists for upper- or lower-body workouts, for example, or extra challenging moves to freshen up their gym routines: Box-jump burpees, Bulgarian squats, or dive-bomber push-ups, for example. They can then post the playlists on their social networks, to share with friends.

“Taking a cue from Spotify, we wanted to do something unique and useful in the fitness category,” Matt Anderson, creative director at Struck, which developed the program for ASICS, tells Marketing Daily. “Users already love the format of building and sharing playlists for their music. This adapts that technology to training.”

The training library contains 180 videos, filmed using ASICS athletes and trainers. But users can also record their own exercise videos and upload them, “and we envision that the variety is really going to improve dramatically as more people use the new program,” adds John Gross, Struck’s account director.

Cross-training programs -- most notably CrossFit -- are extremely popular right now, he explains. “This new wave of training, the idea of adding variability to workouts all the time -- what can I do today that’s different? -- is really gaining in popularity, and allows for endless customization. We wanted to find a digital way for ASICS, which doesn’t have the monstrous budgets of Nike or Adidas, to expand into this kind of training.”

CrossFit is a partner of Reebok, owned by Adidas.

Gross says the program has a strong mobile component, since users are likely to build exercise routines from their desktops, but access them via smartphone while at the gym.

Brooks Running Company, meanwhile, is hoping to create its own social wave,  and is teaming up with MapMyFitness to create the Run Happy Group, a virtual community for runners to share what they love about running. Through its MapMyRun app, runners have the opportunity to use the RateMyRun feature, selecting choices like Crushed Goals, Kicked Butt and Finished with a Smile.

Users can share on social networks, creating their own Run Happy networks, sharing running routes, and tracking distance, time, pace, and calorie burn. There are also how-to, inspirational and motivational elements. Through tie-ins with some 300 specialty retailers, the app also hooks them up with local running groups and clubs. There is also a Run Happy Instagram feed.

A spokesperson for the Seattle-based Brooks says ads to create awareness of the Run Happy Group begin this month, in running and fitness publications.