Ads In The Form Of A Question: Qriously Wants To Put 'Horrific' Mobile Ad Experiences In Jeopardy 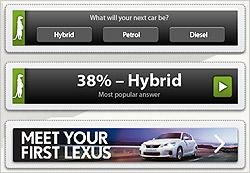 The mobile display ad format is not just broken, says Christopher Kahler, CEO and co-founder of m-ad startup Qriously. Speaking as a former developer of apps who both ran ads and used them to generate traffic, he admits “we thought the ads we were serving were horrific, awful experiences.” Not only is the creative un-engaging, but the whole notion of simple impression-based advertising misses the intimacy and interactivity of the device itself. “It was the typical fallacy of taking advertising from a previous medium and the end results were crappy.”

Qriously joins the parade of ad platforms hoping to crack the problem of building ad formats that are native to mobile in posing ads in the form of a question. The Qriously ad format grew out of an experiment that Kahler and his colleagues tried in their previous app development company that used the banner space to ask the user a question that identified their interests. Asking people a question instead of serving an impression seemed a more natural and conversational way of engaging a user on a phone. Based on initial strong response rates, they formed a company around this, hired a veteran of the question industry, Dynamic Logic’s Joe Zahtila, and launched the idea as a research platform.

“Our first use was for research purposes,” says Zahtila. “What we also saw was the potential for more meaningful ad targeting.” An app might ask a user where they prefer to run, road or rough, and then serve them a more targeted ad message. For a Lexus, for instance,  the lead unit asks what the user’s next car will be -- hybrid, petrol or diesel? But rather than delivering an ad right away, the user is engaged by the poll itself and gets the results. The next step is an ad.

Apparently, responding to questions on a given topic is a great pre-qualifier. “We found that answers are only given by people with an expressed interest,” says Kahler. A question about luxury hotels tends to render audiences that are in the right demo and have an interest in the category. They claim that that the usual targeting methods on mobile are using proxies to identify the interested. “We think it is more important [for a grocery store] to communicate with the someone who says they do the grocery shopping for the household,” says Zahtila.

Qriously pays for the distribution, using most basic signals on the mobile exchanges. They are selling to advertisers the idea of identifying and providing a long-term prospect -- someone with whom the marketers will want to have an ongoing conversation. “It isn’t clicks and impressions, but people,” says Kahler. They charge on a per-qualified-consumer basis and claim that campaigns are resulting in strong brand lift and intent metrics. The typical campaign runs three months.