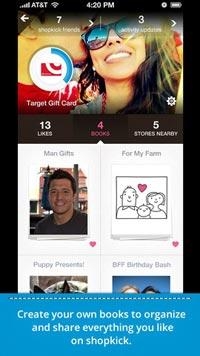 When shopkick first launched its popular shopping app three years ago, the idea was to help drive foot traffic to its brick-and-mortar retail partners. But with the rise of showrooming and heightened competition from Amazon in particular, the company is now giving users the ability to purchase products directly through the app.

Shopkick announced Tuesday that people can buy select items and earn rewards through its updated app from more than 30 stores, including Target, Macy's, Best Buy, Old Navy and Anthropologie. Its system allows users to earn points, or “kicks,” toward prizes through actions, such as visiting stores and browsing or buying certain products.

The addition of in-app purchasing follows shopkick’s rollout of curated “Lookbooks” last fall showcasing items from retail partners after the company found users were increasingly using the app outside of stores to prepare for shopping trips. Users can now also “Like” favorite items in customized product books and get automatic reminds about them when entering relevant stores.

“We want to make sure shopkick is there, wherever and whenever, to make shopping more fun and rewarding," said shopkick co-founder and CEO Cyriac Roeding, in announcing the new app features today.

The company and its retail partners are also trying to combat showrooming, the practice of scoping out a product in a traditional store before shopping for the same item at a lower price online.

More than half (58%) of smartphone owners and a third of all U.S. adult shoppers now showroom, according to a study released Tuesday by Parago, which develops marketing programs for retailers and manufacturers. Shopkick is taking aim especially at Amazon, the online retail giant as the chief beneficiary of the showrooming phenomenon.

"Using our app to buy goods means you will be buying goods from the actual stores, not Amazon. We are the anti-Amazon coalition,” Roeding told FierceMobileContent.

In use across more than 7,500 retail stores and malls nationwide, Shopkick said in January its service has driven more than $300 million in revenue for retail and brand partners, including $200 million in 2012. The company, backed by investors including Kleiner Perkins Caufield & Byers, also says it has been profitable since last year.