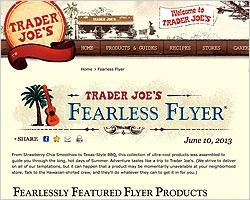 Ring those goofy bells and put on your Hawaiian shirt: Trader Joe’s turns out to be America’s favorite grocery store, buoyed by high marks for its festive atmosphere and speedy checkouts. And Walmart ranks as the least satisfying place to shop.

In a ranking of consumer preferences weighted to overcome regional differences, Market Force Information reports that after Trader Joe’s, the Monrovia, Calif.-based chain that has made a name for itself with high-quality and private-label products, Publix and Whole Foods came in second and third. (The three top stores all won big in courteous staff, inviting atmosphere and high-quality produce.)

But the real story, Market Force’s CMO Janet Eden-Harris tells Marketing Daily, is that overall, most shoppers are more or less satisfied with their favorite grocery store. “Even Walmart, which came in last in our ranking, had close to a four-point satisfaction score, out of five points, even though they were less likely to recommend it. That’s really pretty good.”

The study includes some 6,600 respondents, who were asked about their satisfaction level with their favorite store and how likely they are to recommend it, and then about 16 different attributes, including selection, cleanliness and courtesy. “What’s become clear is that there are certain attributes that are simply table stakes, including convenience and price. But if you want to truly delight customers? You need to be scoring as well on operational aspects as you do on everything else.”

Fast checkouts, gracious staff and atmosphere all provide a place for chains to differentiate themselves.

The Colorado-based market research company says that by region, Stop & Shop is the favorite in the Northeast, while Kroger won in both the South and Midwest. In the west, Safeway came in first, with Loblaws named No. 1 in Canada.