It was probably only a matter of time given the rapid acceleration of programmatic trading, but the ad industry now has its first official “Programmatic Upfront” event. The event, which AOL is hosting on Sept. 23 during Advertising Week in New York City, is being described by AOL insiders as the “first-ever industry call to arms to change the way large-scale display is bought and sold.”

“We are going to change the game,” says an AOL spokesperson, noting, “Buying programmatic media on an upfront basis frees thousands of highly creative man hours.”

It makes sense that AOL is grabbing the horns on this one. Its Advertising.com unit was a pioneer in the ad network business, which was a precursor to the modern day “audience-buying” marketplace that programmatic buying is premised on, and AOL chief Tim Armstrong has been pushing technological innovation to help differentiate the company from the rest of the digital titans, acquiring Pictela, launching Project Devil (1 and 2), and rolling up all these tech assets into a centralized AOL Networks division.

One of the chief goals of the new Programmatic Upfront initiative isn’t just media-buying efficiencies, but to free up the human resources that have historically been involved in the supposedly automated programmatic marketplace to enable people to focus more on developing creative applications around those media buys.

In fact, the announcement comes with an analysis illustrating the number of middleman intermediations involved in a typical programmatic buy, as well as the mark-ups and margins that get sucked along with them.

AOL calls the analysis “The Technology Tax,” and it illustrates how each dollar of ad spending between a brand and a publisher gets sliced and diced along the spectrum -- from advertiser to DSP to assorted other vendors to SSPs and finally to the publisher. According to AOL’s analysis, the intermediaries take between 55% and 75% of each dollar spent on a publisher participating in a programmatic trade.

“By comparison, in TV, this number is about $15,” the AOL spokesperson noted, showing just how bloated the ad tech industry has grown.

While it’s not yet clear exactly how AOL plans to reduce that bloat, the company says it expects more than 150 clients to attend the Programmatic Upfront, and the focus will be on “exploding creativity.”

“We will celebrate the creativity headed our way as technology, data and automation free up marketers and agencies to do wildly imaginative things,” AOL’s Armstrong writes in a blog post describing the intent.

“Since the 1970s, TV has been the primary beneficiary of upfront buying. In the last two years, digital has also held upfronts, with a heavy emphasis on video inventory.   But as chief marketing officers and other brand stewards come to terms with the reality that proving ad spend ROI is ‘the new black,’ there is every reason to believe advertisers will soon be willing to pre-allocate media budgets against large scale display inventory.” 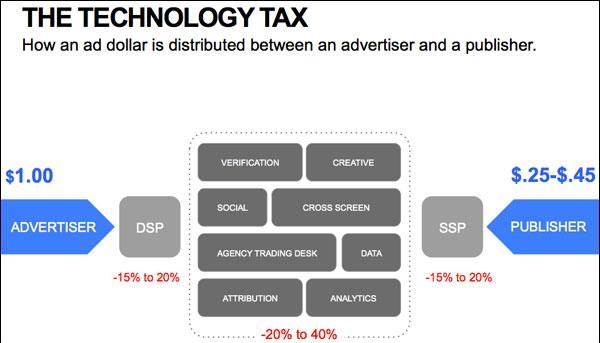