Hyundai Gets Zombie Seal Of Approval 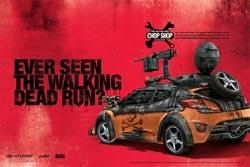 We live in scary times, but there's at least one bit of good news: zombies have not jumped the shark. Unless, that is, they make “Sharknado” with zombies. No, the living dead are going strong -- thanks to the popularity of comics, and the entertainment deals that have spread from the page to the screen like Solanum, and the fact that being a zombie means never having to say you're sorry.

The ghoul phenomenon has also benefited from cross-pollination with the Comic-Con phenomenon, and guess who has benefitted from that? Hyundai, for one. The automaker’s second year of a relationship with “The Walking Dead” show and comic from which it derives has allowed it to tap into a Millennial fan base -- people with a freakish devotion to personalizing things, like their bodies, as anyone knows who has gone to one of the events.

Hyundai Motor America’s zombiegeist is with Robert Kirkman, who created "The Walking Dead" show and graphic novels from which it leaped. Last year, the partnership involved a Kirkland-designed anti-zombie Elantra Coupe. This year, anyone who goes to the “The Walking Dead Chop Shop” walkingdeadchopshop.com gets to design a zombie-proof, ghoul-killing Hyundai with the chance of getting it built for a Comic-Con tour.

Greg Braun, SVP, executive creative director, AOR Innocean U.S.A., which created the program with the automaker, tells Marketing Daily that working with Kirkman and Comic-Con is a no-brainer, so to speak. "You have a strong fan base of influencers at Comic-Con, and Kirkman is the godfather of the zombie genre, and he touches everything associated with the show."

Braun adds that the huge success of the show -- the most successful ever on basic cable in terms of viewership -- doesn’t hurt. "It's no longer a niche; it's huge." He adds that Hyundai's involvement around letting people create a zombie-proof car -- suggesting features it could have with Kirkman choosing the best -- is a way to be authentic without hijacking content with tactics like heavy product placement. "It's a great way to engage."

The "The Walking Dead Chop Shop" has a configuration app with tools and features, and some 300 car parts and custom graphic decals created in collaboration with Kirkman and comic book artists at Skybound. People who create a zombie-proof version of the Elantra, Veloster Turbo or Santa Fe can share with social networks and get a survival score. One can also test the vehicle in digital “Walking Dead”-inspired scenarios, and then enter the vehicle into the contest in which Kirkman chooses which will actually be built. That car gets unveiled at New York Comic-Con.

The effort is backed by print ads in books like Entertainment Weekly, Xbox and PC Gamer, and there will be thematic TV advertising around the 10th-anniversary season of "The Walking Dead" this fall. The effort includes a presence at Comic-Con International in San Diego, radio buys, video content in pop-culture sites, and social media targeting "The Walking Dead" fan base. There are also custom ads by Skybound comic artists in The Walking Dead comic books.