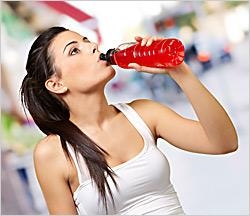 The beverages have seen cumulative five-year growth of 25%, despite a down year in 2009, because of double-digit gains in 2010 and 2011 (10.6% and 12.5%, respectively), driven by the economic revival and PepsiCo's rejuvenation of its Gatorade brand.

Meanwhile, sales of nutrition bars, which saw 9% growth even in 2009, rose 14.2% last year, to $2.3 billion. Packaged Facts projects that this category will see about the same growth rate this year, and realize low-double-digit to high-single-digital growth over the next five years, to reach $3.9 billion by 2017.

Powered by 77 million users of sports drinks and 28 million consumers of nutrition bars, the sports nutrition market draws a wide and varied group of consumers. However, that translates both to opportunities and challenges, notes Packaged Facts research director David Sprinkle.

Women drive the nutrition-bar category. Female consumers of nutrition bars outnumber their male counterparts 15.2 million to 12.4 million, and account for 55% of all consumers who have eaten at least one nutrition bar in the last 30 days.

A third (34%) of nutrition bar consumers are Boomers, while 23% are Millennials. Nearly 70% are non-Hispanic white.

In contrast, 64% of high-volume users of sports drink users are male, 36% are Millennials (25% are Boomers), and 54% are non-Hispanic white.

One of sports drink makers' biggest challenges is that the population of males under 25 will decline over the next decade as the aging of America begins to accelerate.

Consumers pursuing individual sports and fitness activities, rather than team sport players, are the key to success in the retail sports nutritional market.

Those taking yoga classes (1.3 million) as well as those pursuing outdoor activities such as mountain biking (1.5 million) and camping and backpacking (1.2 million each) are more numerous than the soccer, football, softball, baseball or volleyball players using these products.