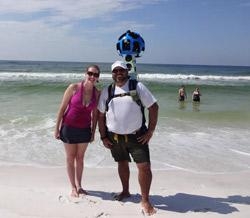 Given the predilection that tourism marketing organizations have for beautiful photos of mountains, rivers, beaches, castles and the like, one wouldn't think -- on the surface -- that Google Maps would be a route to showing what's out there. But if anyone would do it, Florida's official tourism arm, Visit Florida, would.

Crowdsourced tours of beaches and expert bloggers' explorations of lesser-known Florida attractions have been a keystone of the state’s social media-rich consumer Web site for a few years now. And given the fact that people use street-view on Google to check places out before visiting, it makes sense that the organization might want to use the platform’s map function to show Florida beaches, which share the top-draw status with Florida theme parks. So the organization is running a four-month "odyssey" program using Google Maps' 360-degree cameras to capture the state's 825 miles of beaches.

Google Maps folks are training two teams of two who will hike 50 miles of beaches each week. One of the pair will wear a 40-pound pack with the basketball-sized 360-degree Google camera atop. The camera takes shots every 2.5 seconds, per Kevin McGeever, Visit Florida's senior editor, who is overseeing the project. He tells Marketing Daily that the organization did a months-long search for the right people to do the heavy lifting (literally). One of the requirements: that they be able to actually carry a 40-pound backpack in the heat of the day, while the second person serves as scout, pinch hitter and journalist.

McGeever says a key aspect of the program is linking photos of each destination to content: blogs, stories, other photos, and nearby attractions, so that "a user will be able to search by geography, name of beach, region or 'flavor.’” The bottom line, he says, is storytelling. "It's pushing forward to find new ways to tell stories about Florida. The end game is to integrate mapping of beaches to inspiration. The end game is giving people reasons to come, and to make that as easy as possible."

The state also has a network of 75 journalists from major outlets who, per McGeever -- himself a former staffer at the St. Petersburg Times, have done some 700 stories on the state in the past two years. "A fifth of those are in Spanish, and 40% are videos; and pre-roll ad rate is 2.5 times greater than banner ads."

Per Visit Florida statistics, there were 6.8 million visits to the consumer site last year, representing a 7.1% increase over 2011 visits. The state got 91.4 visitors last year, who spent $71.8 billion -- a record.