BMW Unveils I3 In Three Cities 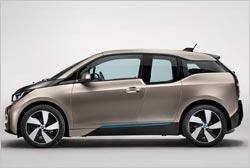 BMW has pulled the wraps off of its first all-electric car, the BMW i3, the concept of which was revealed two years ago. The company is manufacturing the vehicle in Washington State out of aluminum and carbon-fiber-reinforced plastic in plants powered by wind and hydro.

The company, which said the car will come in at around $41,350, unveiled it on Monday in New York, with simultaneous satellite link with London and Beijing. The point of the tri-city reveal was to hammer home the point that the i3 is intended as an urban premium vehicle designed to solve some big-city pollution and mobility problems.

Ludwig Willisch, BMW of North America CEO, said the electric car is as revolutionary a change to mobility as the smartphone was to communication. "From sketch to street it's unique in every respect."

The automaker brought in both Jay Inslee, the governor of Washington State, who talked about how the state is supporting the program, and New York Mayor Michael Bloomberg, who said: "It's wonderful it’s able to attract great vehicles," adding that he once had a Bimmer himself until he became mayor and had to get rid of it. Bloomberg said the goal is to make 20% of cars driving around the city electric.

Steven Althaus, director of BMW Group brand management and marketing services, tells Marketing Daily that the car was dreamed up as a mega-city solution for the U.S. and the BRIC markets. "More people are moving to these cities, and we see that trend in China and India -- in all of the BRIC markets -- so it’s up to the car industry as a whole to support this. For us, it's not meant as an isolated approach, but as a holistic solution, and part of the political agenda."

The political aspect, he says, involves getting city leaders to get more proactive about adding infrastructure -- e.g. charging stations in parking garages, which Bloomberg said he plans to implement. BMW expects that this car will be bought by people -- affluent or close to it -- who will use this as a second vehicle for tooling around cities. "It's purpose-built, so we expect households to be buying this car for daily driving," says Althaus.

There are two phases for marketing for the car, one that started with the 2011 concept introduction, and a second that moves now up through launch. "It's a long process around documenting that we are willing to invest in this; we are now shifting communications about this car from explaining how it will come to be, to how it works, how fun it is to drive, and easy to own. We will also explain the total cost of ownership, and why we have developed it."

In terms of the product portfolio, Althaus says the i3 serves as a "bookend" vehicle with the electric car at one end of the spectrum and BMW’s M high-performance cars at the other. "BMW is big enough to do this and small enough to not do it with stupid choices. Both i and M are meant to be fun to drive. I think the engineering capability is the root cause and reason to believe that we can pull this off."