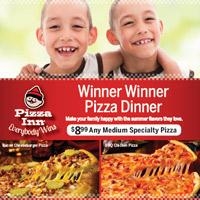 Pizza Inn, a 55-year-old chain known for its family-friendly, pizza-and-beyond buffet concept, has launched a $1.4-million branding/promotional campaign incorporating digital and mobile, as well as traditional advertising and marketing.

The Dallas area-headquartered Pizza Inn brand, which has some 300 franchised locations in 16 states (and 11 international markets), plus 14 company-owned locations, also offers an express concept and delivery/carry-out. That flagship brand is owned by publicly-traded Pizza Inn Holdings, Inc., which is also in the process of rapidly expanding Pie Five Pizza Co., a franchised fast-casual concept, specializing in made-to-order pizzas ready in five minutes.

The new campaign for Pizza Inn, dubbed "Pizza Inn Everybody Wins," seeks to return the brand to conveying its core values to consumers, after a period in which it had lapsed into competing in the "pizza wars" via new-product and pricing promotions, says Bob Moler, VP of retail and restaurant for Slingshot LLC, the Dallas-based marketing and advertising agency hired to create the campaign.

The "Everybody Wins" theme underscores that Pizza Inn's buffet -- which lets everyone select from or custom-ordered freshly made individual pizzas, as well as choose from a variety of pasta dishes, sandwiches (including its signature Bacon Cheeseburger), salads and desserts -- solves the perennial problem of forcing everyone in the family to agree on the toppings, the crust and the size of their pizza.

At the same time, the campaign represents Pizza Inn's first major effort integrating social, mobile and other digital channels with traditional advertising. "Today, our guests consume media across a variety of channels... . We are now going to be part of those conversations," Dekker says.

In addition to point-of-sale promotions, FSIs, ads in local publications and direct mail, the campaign's "hyper-local, geo-targeted" components include mobile messaging and paid advertising on social media and location-based sites (including Facebook, Google+ and Foursquare) in 44 media markets in the chain's 16 states throughout the summer. Additional efforts are planned for the fall and beyond.

Flash banner ads convey messages such as "Agreeing on a movie is tough...Agreeing on dinner isn't...With so many choices, everybody wins" at Pizza Inn. The ads link consumers to a coupon offer (such as "buy one buffet and two drinks, get another buffet free"), redeemable at their local Pizza Inn locations.

The chain is also taking more engagement-driven (as opposed to mainly promotional) approaches to its social media presences, reports Moler.

For example, Pizza Inn's Facebook page (currently showing nearly 36,000 "likes")  is featuring a "Pizza and a Movie" app, which generates the user's "perfect pizza movie match" based on his or her answers to a series of questions.