Esurance is rolling out anothe 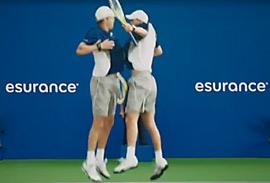 The spot, called “Tennis for the Modern World,” features the world’s #1 doubles tennis team -- the Bryan Brothers -- discussing how technology has revolutionized everything, from tennis to insurance.

The spot shows the Bryans in period costumes through the unforgettable eras of tennis, highlighting the advancements that technology has made to the game over the last 75 or so years. It will run on select network and cable programming, including in U.S. Open and U.S. Open Series programming.

The effort is congruent with the financial service’s company’s brand messaging around technology and Esurance’s “modern world” approach to insurance.

The campaign includes online, out-of-home, print, and search, which will run until Sept. 9. All of this is a wrapper for the brand’s U.S. Open tennis sponsorship, which is now in its third year, as is the partnership with the Bryans.

It also features a sweepstakes with the Bryans on the Esurance Facebook page. The contest will send one winner and their guest to New York to attend opening night at the U.S. Open on Aug. 26 as special guests of the Bryan Brothers.

Facebook users can go to the Esurance Facebook page, "like" it, and complete a short entry form for their shot at a chance to catch the action with the Bryans on opening night of the most watched tennis event in the world. The contest ends Aug. 12 at noon.

Visitors to the Esurance Facebook page can also watch and share exclusive behind-the-scenes vignettes of the making of the "Tennis for the Modern World" commercial, including additional footage of the Bryans in iconic tennis fashions, with commentary about how tennis has changed over the years. There are also downloadable infographics highlighting the Bryans and advancements in racquet technology, tennis fashion, and doubles tennis.

Esurance is the official car insurance sponsor of the U.S. Open and has a history of supporting tennis and tennis philanthropy, including past work with the Bryans and the USTA's national charitable foundation, USTA Serves, to benefit tennis programs for at-risk youth. That is continuing in 2013 with Esurance's sponsorship of Arthur Ashe Kids' Day at the US Open to help support USTA Serves and the National Junior Tennis and Learning (NJTL) network.