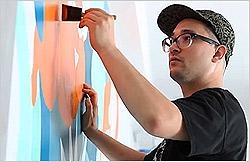 As an exercise in self-promotion, Behr paint has been using BuzzFeed to reach hipsters who are into do-it-yourself home modification via applying a variety of hues on interiors, versus painting exterior murals on buildings in Brooklyn’s Williamsburg neighborhood.

The effort involves a "Meme Mural" by Mr.Kiji, an artist on track to be social media’s Peter Max or Norman Rockwell, or whomever comes to mind, but who derives his inspiration from the social Web, and presumably does not canvas on an easel or paint still-life pictures of fruit and cheese.

This ties in with Behr’s effort to escape the prosaic nature of the category. Other paint manufacturers have done likewise with co-branded lines intended to shift consumer perception of their products away from paint as a commodity for covering a blemished wall and toward paint as an expression of fashion and style, ergo Ralph Lauren Paint, and Martha Stewart Living paint at Home Depot.

But Behr is probably the first to go directly after people who may not even be aware that they have walls, as they may be too busy memorizing social-media memes. Behr’s original effort for the BuzzFeed campaign involved an incredible photo essay on the 24 most colorful cities in the world.

In this latest effort, BuzzFeed used Kiji to make a mural of -- what else -- Internet memes: Corgi in a lobster suit, Long Cat, Nyan Cat, X, all The Y, Advice Dog, Deal with it, Disaster girl, Ermahgerd, Minihorse and All Your Base are Belong to Us (those who do not know what these are have clearly shuffled off this mortal coil, which is from the "Hamlet" meme).

The mural, whose creation BuzzFeed captured on video, includes footage of cans of Behr paint in different hues, Kiji’s medium for the work, now on permanent display at BuzzFeed HQ. The content is also on Behr's BuzzFeed hub, which also sports "7 Ways to Transform Small Spaces In Your Home."

Melissa Rosenthal, creative director at BuzzFeed, says Behr came to the visual social channel because "they wanted to be a cool brand, and this is first time they have done something with social content to appeal to Millennials. This was a way to capitalize on DIY.”

She says the time-lapse, 60-second video of the artist making the mural lives on Behr's BuzzFeed channel, to which BuzzFeed visitors are directed by home-page branded links. "We have had a DIY vertical for a while," she says. "We have been getting a lot of visits, and it's been generating a lot of great conversation." She says BuzzFeed chose Kiji partly because one of the copy editors at the site is his friend. "He was also first choice to create the mural based in Internet Web culture, which inspires his art.”