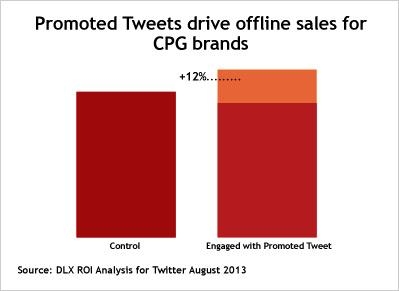 Twitter asked Datalogix to conduct studies for 35 CPG brands measuring the impact of organic and paid Twitter activity (Promoted Tweets) across categories such as beverages, food, wellness, household products and alcohol. Among the key takeaways, users who engaged with a brand’s Promoted Tweets bought more from that brand than an identical control group, resulting in a 12% average sales lift.

Those who simply viewed the Promoted Tweets, without interacting, saw a 2% average sales lift. “This proves that both impressions and engagements from Promoted Tweets are valuable to a brand,” stated a Twitter blog post today about the study.

Similarly, the results showed that a brand’s organic Tweets led to an 8% average sales lift. This rate was three times greater among those who saw five or more organic Tweets during the measurement period. “The implication of this finding is that brands who actively build their follower base and regularly tweet to their followers can see an increase in offline sales,” according to Twitter.

Furthermore, followers who see Promoted Tweets tend to buy more, the study found. Those exposed to the ad units purchased 29% more from that brand than followers seeing organic Tweets alone. Beyond the findings released Thursday, Twitter plans to offer tracking of the offline impact of Twitter activity in partnership with Datalogix on an ongoing basis. It also aims to extend the capability to other industry verticals and countries.

Facebook last year entered into a similar deal with Datalogix, leading privacy advocates to complain to the Federal Trade Commission that the arrangement violated the social network’s privacy consent decree with the FTC. The concern centers on the marrying of users’ online and offline data to track the impact of ads on purchase behavior.

Datalogix and similar companies collect loyalty card data from retailers and catalog companies in the U.S. that voluntarily provide all of the customer purchase history. That information can include Personally Identifiable Information (PII), such as name, address, phone number and email address.

Acknowledging the privacy issues online-offline tracking raises, Twitter in its post emphasized steps being taken to protect its users’ privacy. Similar to how it works with Facebook, for example, Datalogix uses a process that hashes, or scrambles, email addresses and other data to “anonymize” the information.

Among other safeguards, it said Datalogix never sends Twitter information about individual users’ purchases and that the reports created for advertisers include only aggregated anonymous information. Datalogix also segregates the information received from Twitter and doesn’t incorporate it into its existing data base.

Twitter noted users can opt out of Datalogix measurement studies anytime by going to the company privacy page. If a user opts out, it won’t send the user’s hashed email address to Twitter. The bigger question: how is a typical user to know they have the option of opting out of the studies unless they read Twitter’s blog post?

On the brand side, at least one major CPG company -- Mondelez International -- which was a beta test partner for offline sales impact, expressed confidence in the service.

“Many of our brands, like Trident, Oreo, and Wheat Thins, are very active in the Twittersphere, and with Twitter’s new offline sales impact capability, we will be able to measure the connections between our organic and paid Twitter activity and in-store sales,” said Bonin Bough, vice president, global media and consumer engagement at Mondelez, in a statement included in the Twitter blog post.

But since Twitter is paying for the research, and the methodology isn't spelled out, brands and retailers generally may want to take the results with a grain of salt