Robert Downey, Jr.'s The One For HTC Change Campaign 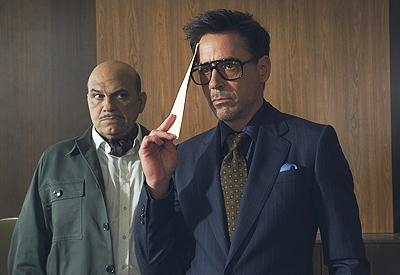 Robert Downey, Jr. is cast as the new face of HTC in a cinematic campaign celebrating the change-making status of the company with the tagline: “Here’s to change.”

Set to kick off later this week and roll out globally is a surrealistic TV spot and lengthier companion YouTube video in which Downey pops in and out of a series of adventures, starting with a James Bond-like descent by helicopter, a car wash scene featuring trolls, and much more.

Downey did more than just act in the spot for the smartphone. He also played an integral creative role, said Erin McGee, HTC VP of marketing, which launched in April emphasizing its all-aluminum body, personalized information BlinkFeed and Boom Sound as “Everything your phone isn’t.”

For the past few days, a social media campaign hinting of change to come and introducing hashtag #HTChange has been building on YouTube. A whimsical and engaging HTC name generator allows you to create your own HTC-isms and share your “hysterical text combination” through Facebook and Twitter.

It was Downey’s rebellious personality, sex appeal, charisma and wit that made him the perfect match for HTC, McGee tells Marketing Daily.

“We’re really teeing this up as a way to talk about HTC One,” she said. “We are really pulling people in to say, ‘Wow! It’s anything you want it to be.’”

What many don’t realize, McGee said, is that HTC has been at the cutting edge, introducing the first Microsoft Windows phone in 2002 and the first Android phone in 2008.

WPP Group's 171 Worldwide was lead creative agency for the ads, which were directed by Bryan Buckley.