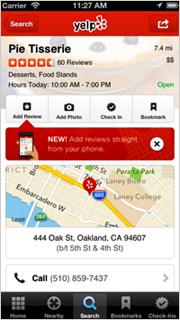 Addressing one of its users’ biggest complaints, Yelp is now allowing people to post reviews directly through its mobile app rather than only via the desktop.

Starting today with the latest update of its iOS app, (and soon in in Android), Yelp users can post ratings and reviews of local businesses while on the go, similar to what they already do on the Web site. Any photos that someone has taken of a business will also appear in line with mobile reviews.

“Given the fact that Yelp’s mobile application is used on nearly 10.4 million unique mobile devices on a monthly average basis last quarter, we know that consumers are already turning to Yelp while they’re out and about. Now, not only can they discover a great business, they can also share their experience with others,” stated a Yelp blog post on the change today.

At the same time, the company said it will continue to allow mobile users to post Tips -- shorter blurbs about venues. Reviews that are deemed too short by Yelp will be converted to Tips to maintain the quality of reviews as it experiments in rolling out the capability to mobile devices.

In July, Yelp reported a 69% gain in revenue in the second quarter, benefiting from continued growth in local and mobile advertising. It pointed out that 59% of its searches in the quarter took place on mobile devices, and about a third of its 108 million unique visitors globally accessed its mobile site.

Even as users increasingly turn to Yelp on their phones, they have griped in online forums about the inconvenience of having to go home before they can publish a review of a local restaurant, barber shop or other business. Considering that Yelp’s depth of content -- which is centered on its 42.5 million reviews -- is a key competitive advantage, extending review-writing to mobile is a logical step for the company.