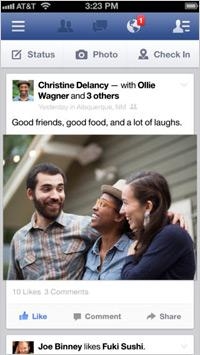 Twitter’s 140-character limit per post has made it a natural fit for mobile since its inception. That is reflected in the fact that more than three-quarters (76%) of U.S. Twitter users access the service from mobile devices, according to eMarketer.

The research firm estimates that 28 million people use Twitter on their mobile phones monthly -- up 22% from last year, but well below growth in prior years, including a 77% jump in 2012. Twitter mobile users this year will account for 11.4% of mobile phone users and 8.8% of the overall U.S. population.

As a percentage of all mobile social network users, eMarketer predicts that Twitter use will actually peak this year, at 28% before gradually slipping to 26.8% in 2017. Its share of the mobile social audience is expected to dip even though the number of Twitter mobile users is projected to grow by 55% to 43.3 million by then.

Unlike Twitter, Facebook wasn’t initially associated with mobile use. It is now. The social network earlier this week released data showing it has almost as many monthly mobile as desktop users, at 101 million compared to 128 million. As with Twitter, Facebook’s U.S. mobile growth will slow from earlier years as more people use their phones for social networking.

Still, eMarketer projects its mobile user base will climb to 154.7 million by 2017, representing almost 96% of the mobile social networking population. But because of the expanded mobile social population by then, the percentage will actually be down from nearly 100% this year.

Besides absolute numbers, the proportion of U.S. Facebook users that access the service on mobile phones will also eventually eclipse that of Twitter. More than two-thirds of Facebook’s U.S. users (67.6%), will do so this year, with that figure increasing to 95.5% in 2017.

eMarketer bases its estimates of U.S. Facebook and Twitter usage on the analysis of survey and traffic data from research firms and regulatory agencies, historical trends, company-specific data and demographic and socioeconomic factors.

Both Facebook and Twitter, of course, have taken steps to monetize their mobile usage, with the former getting a late start but ramping up quickly in the last year. Mobile ad revenue made up 41% of Facebook’s total ad revenue in the second quarter, up from almost nothing a year ago.

Breaking out revenue figures for Twitter is more difficult, since it’s still a privately-held company. But eMarketer earlier this year forecast the company’s ad revenue worldwide would double to $583 million, with 60% of that coming on the mobile side.

Twitter and Facebook have both benefited from the adoption of “native” ads in their respective feeds, which are better suited to mobile phone screens than traditional display ads. Now, they will increasingly compete for the same mobile ad dollars.