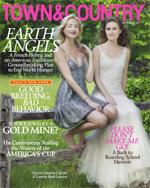 On Friday, for example, Hearst announced its first rate base increase for Town & Country magazine in 10 years -- boosting it 5.5% to 475,000, effective with the January 2014 issue.

“According to MIN data released after Friday’s close, magazine industry print ad pages rose 0.7% for September monthly titles,” Deutsche Bank's Chesler writes in a report sent to investors this morning. “This follows August’s +1.1%, and points to some sense of stabilization in the industry. The year-to-date performance (February through September 2013) is +0.4%, essentially flat, and significantly better than what it was at the same time last year (-4.3%)."

“The commonality is that the strong titles are in food, reflecting Meredith’s scale play in the category, and in parenting,” he explains, “reflecting the recent acquisitions of Bonnier’s Parenting and BabyTalk magazines. Encouragingly, Better Homes & Gardens was +2%, the best result in over a year. A number of titles are still showing declines (Traditional Home -22%, Family Circle -13%, Fitness -5%, More -3%), but the gainers now lead the decliners.”

As a result of these trends, Chesler boosted his first-quarter 2014 ad revenue outlook for Meredith from +1% to +3%.