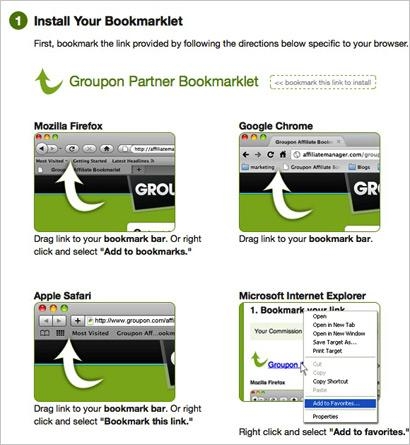 Groupon opened its affiliate marketing program globally on Monday, launching the Groupon Partner Network and reporting infrastructure to manage all the company's efforts related to products, deals and offers.

Available in more than 30 of the 48 countries where Groupon offers deals, the affiliate program aims to increase the visibility and distribution of merchants' deals by driving traffic through content publishers, blogs and social applications.

While the affiliate program is not new, the structures and integrated global do-it-yourself platform opens the door for even one-person blog sites to have direct access and participate in the company's affiliate program and earn a percentage of the sale.

Publishers can earn up to 12% on Groupon Local deals through September, but in October it drops to 10%. The percentages also vary for Groupon Getaways and Groupon Goods -- initially up to 8% for both, but dropping to 6% and 5%, respectively, following the introductory offer.

The program also offers real-time reports on daily sales volumes, impressions and click-through rates. There are multiple tools for creating links to Groupon, like browser bookmarklets and smart widgets based on category, geolocation and retargeting.

About 10,000 online publishers use the program, but Sean Smyth, vice president of global partner marketing and business development at Groupon, wants to see that number climb to 100,000. Ebates, Upromise by Sallie Mae, Dealnews, Fat Wallet, ShopAtHome.com and Slickdeals.net are some of the sites participating in the program.

Groupon built its global network by acquiring local daily deal sites. The company plans to migrate most, if not all, to this new worldwide platform by the end of the year. Until then, some sites will go through third-party systems.

The move follows other closed networks into affiliate marketing, such as Publishers Clearing House, which also rolled out its platform and services Monday.