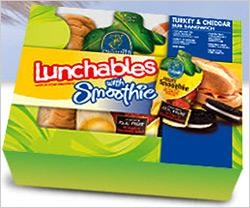 The dual mega-drivers of wellness and convenience have put two divergent categories -- chilled lunch kits and nutritional supplement beverages -- on the growth fast-track in the U.S., according to a new Euromonitor International report on top packaged food trends in the U.S. and other countries in the Americas.

People in the U.S. consume 82 times more chilled lunch kits than their Western European counterparts, reports EI. Nor is this just kid-driven: For example, it's been estimated that one in four Oscar Mayer Lunchables is consumed by an adult.

Adults retain a fondness for the kits, and particularly welcome their convenience (no need to heat, defrosts or assemble). Further, Oscar Mayer and other makers are capitalizing on both the adults' and kids' segments -- warding off consumer boredom and addressing health-conscious parents' concerns -- with frequent new-product introductions (such as Lunchables with Smoothie, featuring Chiquita  fruit smoothies), the researchers point out.

IRI-reported sales data across U.S. retail channels support EI's observation: For the 12-week period ended November 4, 2012, Glucerna's sales were up 24%, to $21.4 million; Boost's sales were up 14.5%, to $41.4 million; and Ensure's sales were up 5.2%, to $76.9 million, reported Drug Store News. (IRI has these products classified under weight-control/nutritionals liquids/powders.)

Doctors often advise older patients to take such products to fill in nutritional gaps, and the category's growth and expansion are expected to accelerate as more Boomers retire, according to EI. In addition, Abbott Laboratories and other makers are seizing the opportunities by introducing stronger and higher-protein varieties.

On another front, EI pegs "miniaturization" of candy as a major trend.

Both Mars and Hershey are introducing mini versions of many of their products in 2013 (including Mars's Mini Snickers and Hershey's Mini Kit Kats) -- and the trend extends to non-chocolate products, as well (e.g., Mars's Starburst Minis), the report points out.

Looking at broader packaged foods trends, EI's analysts believe that Amazon's entry into the online-grocery-ordering/same-day delivery arena may finally make this concept take off -- a development that would obviously have significant ramifications for food makers, as well as traditional retailers.

In a piece examining expanding grocery-delivery services, Bloomberg recently reported that Amazon had 89 fulfillment warehouses by the end of 2012, and is building five more this year. Supply-chain consultancy MWPVL estimates that only 12 more warehouses would then be needed for Amazon to reach 50% of the U.S. population with same-day delivery. Wal-Mart, eBay and others are rushing to expand their own same-day delivery services.

Finally, EI points out that the acceleration of food-industry M&As -- such as H.J. Heinz's acquisition by a consortium led by Berkshire Hathaway, and the proposed acquisition of Smithfield Foods by Chinese meat-processor Shuanghui -- are expected to drive significant changes in the U.S. packaged-foods landscape.

New ownership is likely to result in significant change in the acquired companies' directions, which could include new packaging and pricing strategies, EI's analysts note.

The report can be downloaded free on Euromonitor's site.