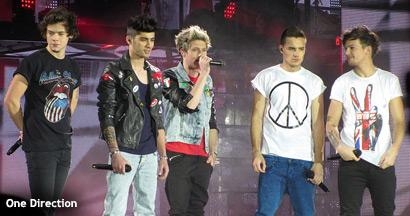 With a constant need to reinvent itself, American Greetings, the nation’s #2 print greeting card company, is borrowing the star power of British pop sensation One Direction.

It has been a busy August. First, the company took itself private. The new greeting card and merchandise line featuring One Direction coincides with release of the band’s feature film “This is Us.”

Another line of birthday cards introduced this week doubles as a gift. Flip a switch on Silly Shakers and watch the characters dance and deliver a greeting.

It’s all an effort to appeal to younger people and stave off the 60% decline in printed product sales of the last decade, as reported by research firm IBISWorld. American Greetings told the Wall Street Journal its average customer is in their 40s. The company blog seems to speak to an even older demographic.

"We are thrilled to bring One Direction enthusiasts’ birthday wishes and friendly greetings from their favorite five guys," says Elizabeth McGrath, director of product development at American Greetings. "It is important to us to connect with consumers of all ages, and with the help of Harry, Liam, Louis, Niall and Zayn, we can do just that."

The One Direction line includes birthday and everyday greeting cards, along with keychains, posters and stickers. The pop stars offer special messages as the cards light up and move.

The timing might be good, as IBIS also forecasts an increase in disposable income could result in an upturn in card sales this year, despite the mass migration to e-cards, email and social media as the greeting vehicles of choice. Digital greeting sales are expected to reach $4 billion in 2013, up 20% from 2012, according to IBIS.

All the technical innovation on the print side comes at a price, the research firm notes, with some cards retailing for as much as $10.

The latest research from the U.S. Postal Service recorded a 24% decline in the number of greeting cards mailed between 2002 and 2010.