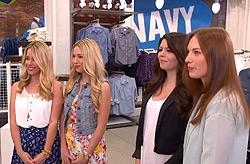 What does Old Navy know about style? Enough to sponsor the launch of Alloy Digital’s “Style Rules” competition.

Debuting this week, the two-episode series is being hosted by Elle magazine Creative Director Joe Zee, and features some of YouTube’s more style-oriented vloggers, including Secret Life of a Bio Nerd, Eleventh Gorgeous, Meghan Rosette and Sorry Girls.

The series will live on ClevverTV -- one of many YouTube channels within Alloy’s youth-focused media network -- and do its best to promote Old Navy’s fall denim lines.

Alloy and Old Navy are relying on the vloggers to deliver a far larger online presence. A dedicated series promotion will exist on each of their channels, and across each of their social media networks. The combination of socially distributed video and authentic editorial voices should prove irresistible to young consumers, according to Michele Schuh, media director at Old Navy.

“Compelling content is at the core of any successful programming -- online or offline,” said Schuh.

The partnership is part of a larger media planning for Old Navy. “In this fragmented media landscape, young women are increasingly consuming video in the digital space, and we're growing our digital video footprint in response to this behavior shift,” Schuh added.

Per the partnership, Old Navy is also relying on Alloy to run targeted display and video across its ad network. Filmed on location at the Old Navy store in SoHo, New York, the series targets 18- to-24-year-old consumers in need of some new denim this fall.

Alloy is perhaps best known as the owner of Smosh -- the madcap sketch-comedy brand Alloy acquired for an undisclosed sum in 2011.

Since its 2005 debut on YouTube, Smosh has racked up more than 2 billion views and 6.8 million subscribers, according to channel tracker VidStatsX. Forbes recently estimated that the brand raked in about $10 million in ad revenue last year.