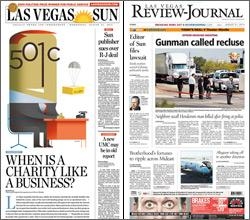 Another newspaper joint operating agreement is coming under pressure in Las Vegas, where one partner in the JOA -- the Las Vegas Review-Journal -- wants to dissolve the JOA and then stop printing and sharing advertising revenue with the other partner, the Las Vegas Sun. The Sun’s publisher and editor, Brian Greenspun, is suing Review-Journal owner Stephens Media to stop the dissolution of the JOA, according to the Sun.

As in other cities, the JOA was agreed by the newspapers at the behest of the U.S. Department of Justice, with the goal of keeping both newspapers viable and thus ensuring continued diversity of reporting and opinion, as well as competition for readers and advertisers in the Las Vegas market.

Greenspun is arguing that the dissolution of the JOA would allow Stephens Media to force the Sun out of business, leaving the Review-Journal with a de facto monopoly.

The story becomes more complicated because several of Greenspun’s own siblings, who co-own the Sun, agreed to terminate the JOA in return for receiving ownership of the valuable lasvegas.com URL. Until now, the Greenspun family has been paying Stephens Media $2.5 million a year for the right to use the URL. However, Brian Greenspun contends that his siblings have no right to dissolve JOA, as doing so would violate federal antitrust laws.

Leif Reid, an attorney working for Brian Greenspun, stated: “The Review-Journal is attempting to eliminate the Las Vegas Sun's alternative editorial voice -- not just in print, but also on the Internet. Paying to eliminate a competitor is clearly monopolistic and illegal.”

As noted, this is just the latest instance of a newspaper JOA coming apart in recent years. In 2009, the JOA between The Seattle Times and The Seattle Post-Intelligencer ended when the latter ceased publication; the Times had previously attempted unsuccessfully to terminate the JOA in 2003. 2009 also saw the demise of the JOA between The Denver Post and The Rocky Mountain News, when the latter went out of business.

The JOA between The Detroit News and The Detroit Free Press is still operational, but the newspapers themselves are shrinking, and the JOA can be canceled in 2015 if both newspapers continue to sustain operating losses, as seems likely