Danny Meyer is the owner of some fantastic restaurants in New York and around the globe including Maialino, Union Square Cafe, and the infamous Shake Shack.  He released a book in 2008 called "Setting the Table," which talks about how he sets himself apart from his hundreds of thousands, if not millions of restaurant competitors by his quality food and phenomenal service.  Setting the Table is ingrained in his restaurant's DNA and his staff all are expected to deliver it. 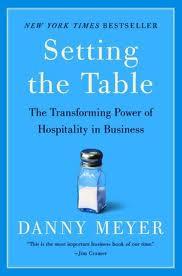 I have written about this in the past so I hate to rehash old work as new, but everyday that passes by I have a increased view that the majority of marketing and advertising technology companies are service businesses even though the majority would not like to admit it.

There are good reasons why passing yourself off as a technology business is an advantage, especially if you are venture backed and looking toward a liquidity event for your shareholders.  The multiples of technology companies are much higher than those of service businesses.

Advertising and marketing companies tout scale.  They like to say that if you implement a certain set of API's, then you can run hundreds of millions of dollars thru the system without much issue. If that's the case, why does RocketFuel tout they are hiring 300 new people this year? Why does AppNexus need 220,000 square feet in New York?  I cannot imagine they need that many new engineers.  But they are winning business and that business needs to be serviced.

As LumaPartners, GCA Savvian, and many others have illustrated, the advertising and marketing technology landscape is cluttered.  There are a lot of players across every conceivable category and for good reason:  all chasing the billions of dollars that are available.  But with so much competition and little differentiation between solutions, service is what is going to win you the business.

Think about Setting the Table at your marketing and advertising technology organization.  Embrace it.  Own it.  It seems to work for Danny and his restaurants that we all would like to frequent.

1 comment about "Food For Thought: Advertising And Marketing Technology".
Check to receive email when comments are posted.
Next story loading