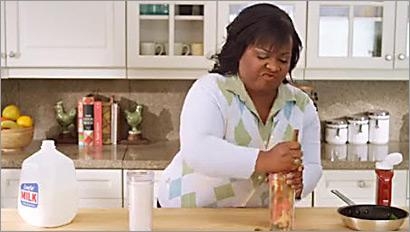 With U.S. milk sales continuing decades of free-fall (per-capita consumption fell 36% between 1970 and 2011), and Americans clamoring for high-protein foods, milk producers are looking to capture some of that protein mojo.

A new "Food Fight Club" campaign from the Milk Processor Education Program (MilkPEP) and lead agency Deutsch, New York -- creators of the iconic Milk Mustache/Got Milk? campaign -- uses humorous videos to convey that the 8 ounces of protein in an 8-ounce glass of milk beats popular breakfast choices like orange juice, an omelet, a breakfast burrito or a bagel with cream cheese.

The videos also emphasize milk's convenience -- for instance, by showing a consumer trying to jam an omelet into a travel mug (shown above).

“We want to capture America’s attention with a quirky tone and remind them that milk is a good source of high-quality protein,” said Julia Kadison, VP, MilkPEP.  “While most Americans know milk is nutrient-packed, they tend to think of calcium and vitamin D, forgetting that milk is a great-tasting, versatile and natural source of protein, as well.”

MilkPEP kicked off the campaign with an Aug. 21 event featuring World Wrestling Entertainment celebrities at Gleason's Gym in Brooklyn, N.Y.

The campaign also includes a sweepstakes in which a free gallon of milk is being given away every minute for eight weeks, and one winner per week gets free milk for a year. (The approximate retail value of all prizes is nearly $330,000.)