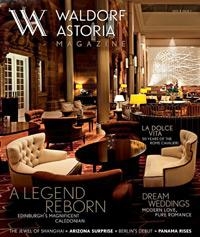 The Waldorf Astoria Magazine focuses on the environments and experiences available at its collection of over 20 properties; it also highlights new additions to the collection, including Berlin, Shanghai and Panama City.

The first issue takes readers on 11 adventures in and around the Waldorf Astoria flagship hotel in New York City, while touching on the hotel’s famous rooftop beehives, seasonal culinary attractions and spa treatments.

The Conrad Magazine gives a similar treatment to the Conrad properties, with articles immersing readers in local cultures and experiences around the world, including elephants up close in Thailand, dim sum in Hong Kong, and contemporary art in Miami. The magazine also draws attention to new Conrad luxury hotels in Seoul, Dubai, and the Algarve.

The magazines will be published biannually with Rodale as a publishing partner. They will be available in Waldorf and Conrad hotel rooms around the world. Digital versions featuring video and bonus content are available for free via Flipboard, iTunes, and the Google PlayStore, as well as at www.waldorfastoria.com/magazine or www.conradhotels.com/magazine.

Allure is partnering with ShopAdvisor to add interactivity to editorial content and advertisements in the magazine’s tablet editions, enabling readers to discover products, learn information and shop directly from the magazine. The new capabilities, implemented in the September digital issue of Allure, allow readers to buy products from a curated list of retailers, across both Web and mobile devices. Readers can also digitally “dog ear” and save products they’re interested in for later purchase, or refer to the saved information while shopping in brick-and-mortar retail stores. ShopAdvisor also enables advertisers to feature additional products and increase ad engagement with “remind-me-later” notifications.

Not content with just covering fashion and accessories, InStyle is getting into the business with the launch of its first branded apparel, the “InStyle Essentials’ Perfect White Shirt,” according to Ad Age. The shirt is intended to solve the problem wherein a button-down shirt pulls apart between the buttons, offering a glimpse of skin beneath -- a phenomenon also known as “peek-a-boob.” The shirt was created by InStyle in partnership with a company called TrioFit, and is available in sizes ranging from 32B to 40H.

Pilar Guzmán has been named editor in chief of Condé Nast Traveler, effective Sept. 3, replacing Klara Glowczewska. Guzmán previously served as editor in chief of Martha Stewart Living, which won the 2013 “General Excellence” National Magazine Award in the lifestyle category. Before that she served as EIC of Cookie, CN’s defunct parenting magazine, from 2005-2009. Her husband, Chris Mitchell, served as publisher of Condé Nast Traveler from 2009-2011; he is currently publisher of CN’s GQ