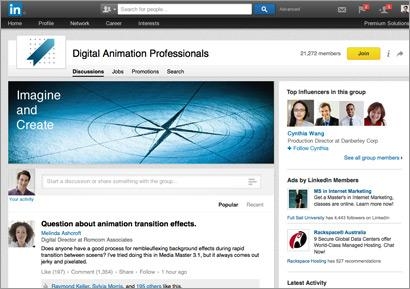 LinkedIn’s group pages are getting an overhaul, bringing them into line with its redesigned profile and company pages. That means a more streamlined look, with an oversized image at the top above a group’s stream of updates.

The right column features “top influencers” in a given group and a link to see all members. It also shows a snapshot of the latest activity, like someone starting a new discussion or posting a comment, as well as listing any subgroups. A sample page for Digital Animation Professionals showed a pair of ad slots below the top influencers box.

LinkedIn says there are now more than 2 million groups, with 8000 new ones added each week. Users, on average, belong to seven groups, and people who post to or engage in group discussions get an average of four times as many profile views, according to the company.

The largest managed group on LinkedIn to date is the Citi-sponsored Connect: Professional Women’s Network, which boasts more than 163,000 members after debuting in April 2012. Staples, similarly, sponsors a group focusing on small business, while Capital One has one for business travelers. Most recently, LinkedIn has teamed with IDG Communications to create a series of tech-oriented discussion groups.

Linked said the revamped LinkedIn Groups pages are initially rolling out to English-speaking members before extending to other languages, as well. People outside the U.S. now make up more than 65% of LinkedIn’s 238 million members.

Separately, LinkedIn this week also rolled out an update of the Pulse newsreader app (on iOS and Android) that it acquired earlier this year for $90 million. The redesign is aimed at making easier to find new publications, categories and Linkedin “Influencers” to read as well as speeding up its search tool. Users can now also search by interest, as well as source title, to pull up relevant material.