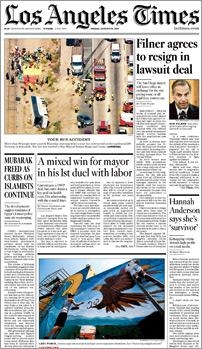 After months of controversy, the Koch brothers’ bid for the Los Angeles Times has ended with not so much a bang as a whimper, as the businessmen have apparently withdrawn from the auction of Tribune Co. properties.

The news was confirmed by a spokeswoman for Koch Industries in response to an item posted on the Daily Caller Web site, which first reported the story.

The brothers, well-known for their support of conservative causes, raised liberal hackles with their attempt to buy the LAT. Leftist activists feared they might turn the newspaper into a vehicle for right-leaning reporting and opinion under their ownership, much as the New York Post and Washington Times seem to reflect the conservative opinions of their owners.

In May, several groups opposing the bid -- including Courage Campaign Institute and Forecast the Facts -- bought online ads asking readers to sign a pledge that they would boycott the LAT if the newspaper were sold to the Koch brothers. The same groups delivered a petition signed by 250,000 people opposing the potential sale to the LAT headquarters.

While these groups are sure to chalk this up as a victory for liberal grassroots action, it’s just as likely that the Koch brothers withdrew after getting a close look at the LAT’s financials and seeing other bids.

The newspaper’s financial woes are common knowledge, as losses helped drive Tribune Co. into a contentious, protracted bankruptcy that ended earlier this year. The slump continued in the first quarter of 2013, the most recent for which data are available, with LAT leading Tribune Co. declines in areas like preprint revenues, full-run national advertising inches, and classified advertising inches.

Despite all this, the LAT may still be attractive to some bidders.

Other contenders for the newspaper are said to include Rupert Murdoch’s reorganized News Corp., recently spun off from Fox; Warren Buffet’s Berkshire Hathaway, which went on a newspaper buying spree last year; Wrapports LLC, which owns the Chicago Sun-Times and might want the Chicago Tribune as well; and Freedom Communications, which jumped into the SoCal newspaper business with the recent purchase of the Orange County Register.