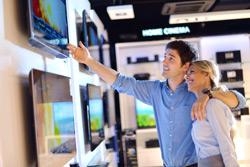 Consumers are still considering (and expecting) to spend significant amounts of money on consumer electronics, particularly those that provide enhanced home entertainment prospects.

According to research from The NPD Group, Americans will spend $555 per person on consumer electronics devices this year, a 9% increase over last year. Nearly three-quarters of all consumers (72%) intend to purchase at least one consumer electronics product over the next 12 months.

At the top of consumers’ lists are flat-panel TVs and tablets. Over the next two years, 28% of consumers said they plan to buy a flat-panel TV, while 20% intend to buy a tablet. Although many consumers already own at least one flat-panel TV, price drops among larger-screen models are leading consumers to think about upgrading, says Ben Arnold, director of industry analysis at NPD.

“We’re seeing a huge movement in screens 50 inches and above,” Arnold tells Marketing Daily. Meanwhile, tablets still have a long way to go before reaching full market penetration (and even those who own one tablet are often looking to add another), he says. “There’s still a lot of the market who have yet to buy a tablet.”

The increase in home entertainment options is also affecting other categories. Purchase intent for soundbars, for instance, has increased (in 9% of households and a 54% increase in sales over 2012), even as ownership of surround sound audio systems has declined.

“If you want to improve the [home] audio experience, there’s a lot of options,” Arnold says. “Soundbars are a new product category, and the footprint is minimal compared to a surround sound system.”

Similarly, sales of stereo headphones with microphones (for use with smartphones and tablets) have increased 65% in the first half of 2013, while sales of wireless streaming speakers have quadrupled, according to NPD.

Other categories, however, are seeing negative effects. Purchase intent for Blu-ray disc players has dropped 4% since last year, as consumers have more options to deliver OTT (and other) video content. (Sales of streaming media players, which are still only in about 8% of U.S. households, equaled the sales of Blu-ray players in the second quarter of 2013.)

“Now that there are things like Chromecast, the Blu-ray player doesn’t have  the monopoly on on-demand programming and content,” Arnold says.

"Shopping for TV" photo from Shutterstock.