M-Commerce Up 24% In Q2, Most Sales Via Smartphones 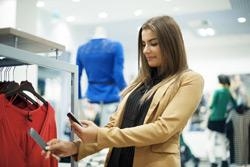 M-commerce sales reached $4.7 billion in the second quarter -- up 24% from a year ago but down 20% from $5.9 billion in the first quarter, according to new data from comScore. The digital measurement firm said the $10.6 million total in the first half of 2013 could surpass $25 billion for the full year.

For the first half of the year, m-commerce accounted for an estimated 10% of total digital sales. Smartphones accounted for 6% of digital commerce in that period compared to 3.5% for tablets. That makes sense, given that there are more than two times as many smartphones as tablet users. But on a per-user basis, spending is 20% higher on average on tablets.

“This is likely a function of the platform's higher-income demographics and its greater similarity to the desktop experience due to its larger screen size,” stated a comScore release today, announcing that it will provide m-commerce sales estimates by product category on both smartphones and tablets.

In that vein, the second-quarter data showed the category of video games, consoles and accessories had the highest percentage of m-commerce spending, at 23.7%. Not surprisingly, event ticketing is another area with a high proportion of m-commerce sales, at more than 15%. Of that share, almost 11% were on smartphones and 4.5% on tablets.

About 10% of clothing sales came from mobile devices (mostly via smartphones), with m-commerce contributing 5.4% to digital sales of computer hardware, and 4.3% of CPG spending. In addition to industry verticals, comScore said it would also provide m-commerce estimates for leading retailers.

comScore also released historical m-commerce figures going back to the second quarter of 2010, when it totaled $600 million. The amount has risen mostly steadily since it peaked at $7.2 billion in the fourth quarter last year as a result of holiday season buying.

Andrew Lipsman, vice president, industry analysis at comScore, suggested that emerging consumer activity like e-commerce tends to be more pronounced during times of higher engagement, like the holiday season, while falling off more dramatically during less busy shopping periods like the second quarter.